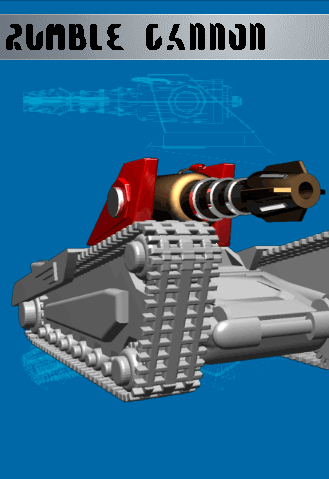 Note: the UFOpaedia image (right) is an error. A Plasma Turret Cannon is shown in-game. The Equip Screen image (left) is correct and shows a Rumble Cannon.

The Rumble Cannon is one of the most powerful weapons that exists in Mega-Primus, capable of launching a rapid barrage of powerful shells at targets. Though not individually powerful or very accurate, the shells are fired in great numbers and each shell can easily punch through even the toughest of the capital class UFO hulls. It does not require ammunition.

The Rumble cannon unfortunately suffers from several serious flaws that do not allow the cannon to be put to its fullest potential. The effective range of the cannon is very short, meaning the vehicle needs to be up close to the target before it can lay waste to it. The cannon also has a limited firing arc, quite debilitating as the vehicle can not choose its facing. Perhaps the biggest crippling factor is that it is limited to a ground based vehicle, the Griffon AFV. This severely restricts its ability to intercept UFOs unless the tanks are strategically placed around the city.

In practice, the Rumble Cannon is nearly useless if your goal is to attack UFOs. That role is most reliably accomplished with the tank's GLM Air Defense. However with manual control the high powered shells are extremely effective at tearing down Megaprimus. This can be useful to deal massive damage to XCOM's enemies like the Cult of Sirius or just for kicks. A lucky Commander may also direct this weapon against the largest UFOs, but will have an easier time using the Plasma Turret Cannon instead.

The Rumble Cannon is the standard weapon mounted on a Griffon AFV fresh from the manufacturer. With the Griffon AFV being the only land based vehicle capable of mounting the Rumble Cannon, there is no need to ever purchase a new cannon unless you sell them.

Note that some images of the cannon are switched with the Plasma Turret Cannon .