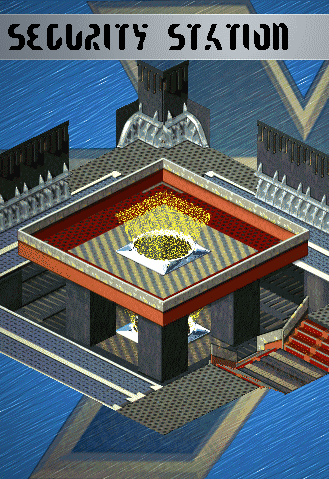 Note: The base view image (left) is at level four. It shows the orientation of the four (orange) turrets which are missing in the UFOpaedia image (right). A security station is used to attack base invaders without having to expose X-Com agents to hostile entities.

An important facility to limit an enemy from exploring your base, and if any are present, limit the chance of losing technical personel. A single base can only support three Security Station facilities at any time during a base defense mission. Any more than three, the active stations will be chosen randomly at mission start, and if those are destroyed, other security stations will not become active.
An ideal placement of security stations would be to surround the Access Lift. If a Vehicle Repair Bay is used, disect the base by having all important facilties away from these two 'entry-points' divided by a choke point of security stations.

A base which does not have any X-Com personel, barracked or visiting, will be immediately destroyed if infiltrated or raided.

A better facility is available once the relevant research is completed.

Note: There is an error when using Turn-Based combat.