NOTE: This article contains endgame spoilers. Read further at your own peril.

T'Leth is the game's final mission where aquanauts must fight through three levels of enemies to reach the leader of the invasion fleet and put an end to it. It is implied that this massive craft came alongside, or perhaps even as, the asteroid impact that led to the extinction of the dinosaurs--- and the rise of mammals, and eventually (and ironically): humans.

To access T'Leth, you need to have built a Leviathan sub and complete the T'leth, the Alien's City research topic. Once the research topic is complete, any Leviathan selected in the Geoscape will have an additional T'Leth button added beside the launch button.

This level looks like the second part of an Artefact Site mission, but the map layout is different and there are only two levels (or "floors"). You must kill all aliens or move your units to the lift (bright yellow floor) and press the "abort mission" button. Note that this lift is on the upper level (l1). 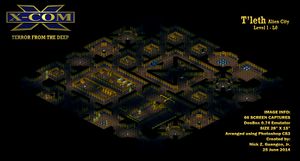 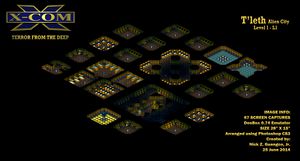 Note that the exit lift has only room for 25 aquanauts, so if you took Leviathan crewed with 26 men to the mission you must either kill all the aliens or be prepared to leave someone behind. If you take the mission slowly and follow the route that you are meant to follow, and explore the occasional side paths, you should meet every alien there is to meet by the time you reach the exit.

However, if you brought any SWS, room is not a problem, because out of the 4 spaces occupied by the tank the game sees the top one as the tank's location. As long the top of the tank is in the target area, the bottom-left or bottom-right half can stick out, saving you two spaces.

Note: Again, the number of aliens is the same as on the second level of Cydonia (23), but they are overall much weaker than the Ethereal/Terrorist mix found there. 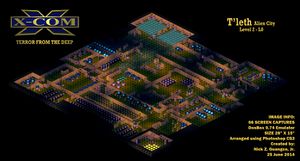 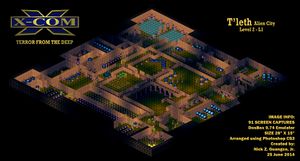 The map is roughly a spiral leading to the Ultimate Alien's coffin. Aside from not being able to save, your overhead map will not function properly! You won't be able to see the terrain, only your aquanauts, aliens and dropped items.

Also, your SWSs can't move through the doors unless you knock them down with Disruptor Pulse Launchers. You'd need a LOT of ammo to knock down all the doors you need to pass to reach the end. However, whilst it's true that the door frames adjacent to the doors are impervious to everything except DPLs, this is not true of the frames above the doors - if you aim at the frame on top, you can shoot it out easily with the Displacer / Sonic cannon and get your SWS through. This speeds things up significantly, especially as you probably won't be using ground-hugging Coelacanths by this point. 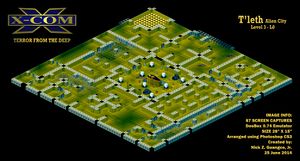 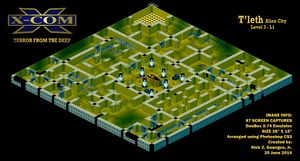 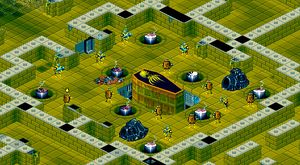 Aquatoids: dangerous but very vulnerable. On the first level they all have MC abilities and will most likely be armed with Disruptor Launchers. Luckily, they almost always die in one hit, and won't survive even on the outskirts of an explosion. On the other two levels they're more of a nuisance, as no longer have MC and will most likely be armed with Thermal Shok Launchers.

Xarquid: moderately dangerous, Xarquids tend to keep their distance and snipe at your men. The Xarquids on level 2 are easily bypassed, but this does not apply to those on level 3, whom you will face as you approach the Ultimate Alien's tomb. Explosives and powerful melee attacks are the best methods of disposing of them, though Sonic Cannons will work in a pinch.

Deep Ones: a weak and common enemy on level 2 and 3. Chances are you haven't seen them for a while. Unlike most aliens here, Deep Ones have neither explosives nor a melee attack. They're vulnerable to just about anything you throw at them, so they're unlikely to cause you any problems.