Does the foundry upgrade on this item work? The item itself does not say anything about +25% crit chance and my soldiers that target an enemy do not seem to have any higher crit chance, nor is it displayed in the more info for the shoot. Mavoc 14:43, 15 October 2012 (EDT)

Changed some of the advice given. You do not want to put S.C.O.P.E.S. on everybody in the early game. Grenades are what will let you deal with Sectoids at higher difficulty levels.

I would say that S.C.O.P.E.s are most useful on Heavies, to compensate for their poor accuracy (the lowest of all the soldiers classes.--Luge 04:03, 29 October 2012 (EDT) 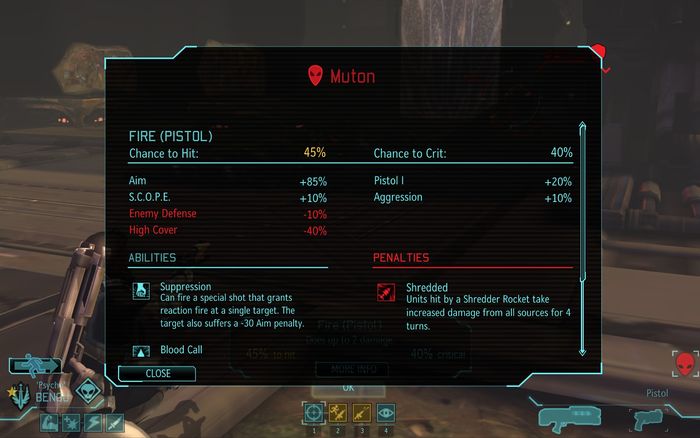 These stack. 20% for Pistol I, 10% for the Assault's Aggression, and 10% for SCOPE, (total of 40%) although, as established elsewhere, the SCOPE crit bonus is not specifically itemized on the crit bonus list. Arrow Quivershaft 11:12, 7 December 2012 (EST)

The new EW text says: "Allows firing at targets in any ally's sight radius, but these targets cannot be critically hit unless using Headshot."

Technically yes, but if your Squad Sight Sniper is not using Headshot for out of range enemies, the game matches your crit chance with equal negative score. S.C.O.P.E does now appear under Chance to Crit in Info Pane but the Squadsight penalty includes any modifiers that are bonus to crit chance. So, Plasma Sniper Rifle gives 35% and S.C.O.P.E gives 10% but Squadsight penalty will jump from -35% to -45%.--DracoGriffin 18:37, 20 November 2013 (EST)