Alien craft regularly enter and leave the Earth's atmosphere (in UFO) or traverse in and out of the deeper reaches of the ocean (in TFTD). In order to prevent them from carrying out their missions, you shoot them down or assault them while grounded. However, in order to perform either of these tasks, you must first spot them, which requires some types of UFO Detection equipment, either in your bases or using your craft/sub radar.

Three types of UFO/Alien Sub detectors can be built on your bases:

Additionally, all X-COM Craft (aerial or submersible) have a detection range of 600 nm. They can be used to search areas remote from your bases, or as a stop-gap while radar is being built.

Your first base starts out with a Small Radar/Sonar; you can choose to add a Large version as well, which will take 25 days to build. Both types can also be added to any other base you establish. Due to a bug in the game, additional Radars/Sonars at the same base (beyond 1 Small plus 1 Large) have no additional effect on detection.

Hyper-Wave Decoders/Transmission Resolvers can only be built after you have done the proper research in each game; in EU, you must interrogate a captured navigator. In TFTD, you need to research Magnetic Navigation first. After it is researched, you can build these enhanced facilities at any of your bases.

The following graphic shows the range of each type of radar system: 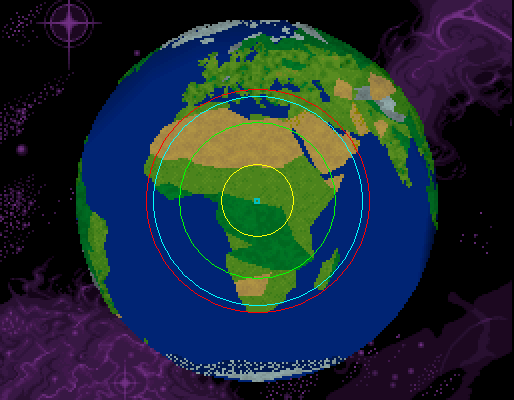 In practice, alien craft will often travel well within the listed detection ranges before being spotted. Detection "checks" are only performed twice an hour by the game, so fast-moving UFOs/Alien Subs may travel quite a distance before the next check is performed; the Small and Large Radars/Sonars have only a 10-20% chance of detecting enemy ships in-range; and alien vessels are not seen until they enter the Earth's atmosphere or surface from the deeper levels of the ocean, which can potentially occur right near a base. X-COM Craft, like the Hyper-Wave Decoder/Transmission Resolver, appear to have a 100% chance of detecting UFOs/Alien Subs that are within their detection range.

Once detected, UFOs/Alien Subs remain visible until they leave the Earth's atmosphere or travel outside the detection radius of all available radars. The half-hour check for detection applies to tracking as well, so aliens may travel far outside your radar coverage before disappearing from the screen. This is especially true for fast-moving ships, which can travel as much as 2500 nm between updates. However, a UFO that leaves the atmosphere (or Alien Sub that dives too deep) will disappear immediately.

Alien Bases can only be detected by patrolling X-COM aircraft (or sometimes by X-COM agent reports at the end of each month). The maximum detection range is 1500nm from the aircraft and the chance of detection appears to decrease with distance. The longer a craft is left patrolling in one area, the more likely it will be to discover all bases nearby.

The following graphic can be used to help decide where you would like to site your bases (and therefore, your radars/sonars). Ensure you have centred the globe on where you are considering placing a base, then export a screenshot from within the game (using the F12 key) and copy this image over its center to see which areas are included within each facility's detection radius. (This graphic is calibrated for screenshots which are doubled in size (640x400)): 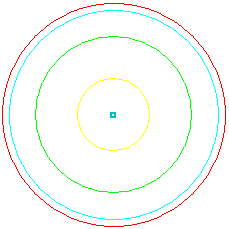 Each radar/sonar type has a chance to detect any UFO/Alien Sub within its range. Detections are performed in the game every 30 minutes exactly on the half hour. (If you are advancing the game an hour or day at a time, you may find the clock jumps forward to exactly a half hour interval whenever it spots a new enemy ship.)

Despite the "Short Range" and "Long Range" detection bars displayed on each base's Information screen, only one radar/sonar of each type will be used at each base; building additional modules will have no effect.

Hyper-Wave Decoders/Transmission Resolvers have a 100% chance of detecting any enemy ships within their range. Given their superior range and detection abilities, these make the other detection types unnecessary. If you have Small or Large Radars/Sonars in a base which also has a decoder/resolver, you can dismantle them.

"Normal" radars/sonars reveal the approximate size, altitude, heading, and speed of aliens within range. Hyper-Wave Decoders/Transmission Resolvers also display the exact craft type, the alien race onboard, what type of mission the craft is on, and where the mission is to be performed.

Faster craft may sometimes appear to have a shorter detection radius, as they can travel great distances between detection updates, so they often only detect alien ships when right on top of them, or even having passed them already. The effective detection range can also appear shorter or longer, depending if the UFO/Alien Sub is moving closer or moving away at the moment of detection.

If an alien vessel moves out of range of your base-based detection systems, you may be able to resume tracking by sending one of your ships to where you believe the enemy to be (based on its speed and direction).

Similarly, by launching an immediate Interception aircraft mission, it may be possible to maintain tracking of a UFO/Alien Sub long after it has moved outside range of ground-based detection - provided the aircraft can keep within 600nm of the target.

All X-COM craft are also capable of detecting alien bases. In fact, this is the only way to discover them: they will not show up on any base radar, including Hyper-Wave Decoders. (However, "X-COM agents" will sometimes report the discovery of a base during X-COM's Monthly Report; see Locating an Alien Base.) In order to discover an alien base, an X-COM craft must patrol within 1500 nm of the base's location. The nearer the craft, the sooner the base will be discovered. Patrolling immediately above a base will reveal it almost immediately; patrolling 1500 nm away, the base may take one hour to discover, or several hours.

Bases can only be discovered by patrolling craft. An X-COM craft could fly over an alien base repeatedly and never discover it until it began patrolling in the area.

It is frequently possible to deduce where an alien base is by the pattern of UFO traffic. The primary mission of Supply Ships/Fleet Supply Cruisers is to supply alien bases; wherever they land, a base is likely to be found. When a base is first being built, four UFOs/Alien Subs (a scout, two supply ships, and a battleship/dreadnought) will converge upon the same area and mill around for a while. (UFOs engaged in an Infiltration mission will display similar behavior involving five ships.) In UFO, the alien race found at a base will always be of the same type as the race found on the initial ships (or the supply ships which subsequently show up at regular intervals), while in TFTD all bases are manned by the same species.

Finally, the UFO/Alien Sub activity graphs, accessed from the Geoscape, can act as a sort of "MUFON" (Mutual UFO Network: a civilian group dedicated to the observation of UFOs/Alien Subs), allowing you to see activity that your radars/sonars cannot.

Turn on all the specific areas/seas and countries/zones and check them periodically. If one of the lines for the current month has changed, that means alien activity is occurring there. The country/zone graph usually provides more useful info than the area graph, though you should check both periodically. On occasion the area graph reports activity that is not reflected on the country graph -- in that case, keep an eye on it since more activity is likely to folllow.

The graphs are updated every half hour. Although tedious, checking them every 3-6 hours can give you enough time to detect and intercept a UFO/Alien Sub while it is still on Earth. Using this method, it's possible to play the game with no radars/sonars, at least for the first few months. After that, UFO/Alien Sub activity becomes too intense and the graphs lose their resolution, but by that time you should have decoders/resolvers already built, or on the way.

Be sure to only look at the current month's activity when trying to track current UFO activity. To make it easier to spot changes, you can write down the activity figures for each area and compare them with the current figures any time you think they've changed.

Checking the graphs less often will not allow you to do realtime interceptions, but it will tell you where to expect trouble, as scout activity always precedes larger craft on a related mission. The graphs are especially useful for discovering where Alien Bases have been built, as they generate frequent Supply Ship activity. Knowing where the aliens have been focusing their attention also gives you a good indication of where to build additional X-COM Bases.

Note that these graphs are actually showing the aliens' score; this is why even later in the game it will be possible to see where the aliens are being able to complete missions, even if individual UFO/Alien Sub flight plans will be swamped.

No matter how wide or powerful your detection network eventually becomes, if you ever find yourself going through any quiet lengths of time where little to no alien activity is picked up, you should make a habit of checking the graphs. Though they will not provide you with exact locations, you will still get a good indication of the region that needs to be patrolled.