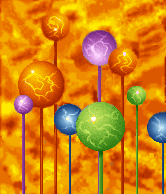 The most likely function of these spheres is recreational. The psionic circuitry stimulates various centres of the brain. The effect is similar to hallucinogenic drugs. This is the only evidence that aliens have any cultural or recreational pastimes.

Wall tiles which are considered to be Alien Entertainment.

These craft components, although maybe interesting to look at, serve no function other than to increase your funds. There is no reason why these should not be sold off immediately. You can make a reasonable sum of money with them, as many Alien Bases, the Terror Ship and the Battleship contains a numerous quantity.

This is not Alien Entertainment.

What actually constitutes Alien Entertainment has baffled many as the UFOPaedia entry specifically states that they are "spheres". The only object which resembles this (see pic to the right) is the "bloodshot eyeball on a stem" (there are also other names for this) but its MCD record shows it is just junk. Also, note that the eyeballs *only* appear on ships which have alien entertainments, and*always* appear in these cases. The only things which are Alien Entertainment are the 4 wall segments shown above.