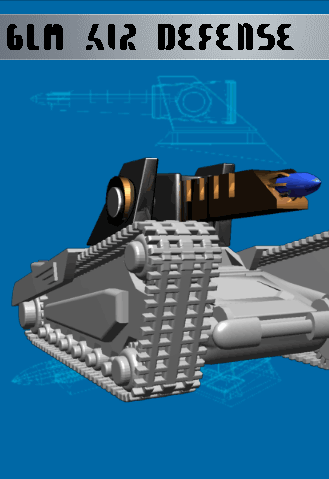 The GLM Missile Air Defense is a tank-mounted variant of the smaller GLM Array that fires a powerful Ground Launched Missile at a generously long distance.

While not as destructive as the Rumble Cannon nor does it share the range and fire power of the Plasma Turret Cannon , the GLMs enjoy the benefits shared by all missiles in that they home in on their targets. This means it is the more accurate of the three tank turrets.

It also shares the disadvantage of the missiles in that it is susceptible to missile jamming and a smaller ammunition supply.

The extra range and homing ability of the GLM missiles give the Griffon AFV's a new lease of life, allowing them to launch attacks while keeping a good distance away from any form of retaliation. As per standard procedure, the tank(s) would have to be strategically placed around the city in order to even have a chance at intercepting UFOs that are in-transit.