This is the basic grenade. Although it has little explosive power, it remains useful throughout the game as a detonator for larger explosives.

AP Grenades are extremely useful for quickly killing Brainsuckers and Hyperworms. Most will die in a single direct hit, though two will likely be needed on higher difficulties.

In real time, agents can save themselves from a Brainsucker or Hyperworm attack by dropping a grenade at their feet(or throwing it with 0.0sec detonation). It'll hurt, but it's much better than the alternative. They are more difficult to aim against Poppers due to their suicidal pace and the need to kill them at range. For this situation, the Marsec Proximity Mine may prove more effective and reliable. 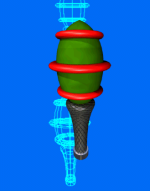 "The Megapol AP Grenade is a standard anti-personnel grenade with a timer mechanism. It can also be activated on impact making it highly useful in time-critical combat situations."