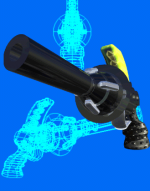 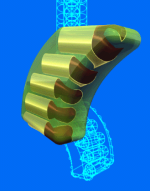 An powerful one-handed weapon which is suitable for all agents. When dual wielded, the fire rate, damage, and good accuracy will cut down aliens with ease. As an excellent all-rounded weapon which is small and reasonable in weight, this weapon may replace all standard weapons until exotic weapons are found. It may not be as accurate as the laser rifle (large and slow), nor as powerful as autocannon with armor piercing rounds (too heavy) or even the machine gun (weak and inaccurate) but it will serve X-Com for a long while. The market will stock this weapon and ammunition in lower quantities, compared to standards weapons. Will not detonate Poppers.