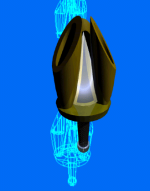 A basic non-lethal grenade used to shroud an area in dense grey smoke to limit visibilty from hostile entities. The smoke cloud replaces stun gas clouds already lingering on the battlescape and will extinguish fires. Aliens will 'throw smoke' almost always when fighting, particularly into Anti-Alien Gas clouds where possible. An X-Com agent without a helmet, and civilians on the battlescape will be affected by smoke and may pass out (slowing stunned) if they cannot avoid the cloud. A smoke grenade is typically thrown forwards, towards the direction of in-coming weapons fire, but may hide Poppers and Brainsuckers until they are too close.

Turn-Based combat may be easier regarding certain tactics.