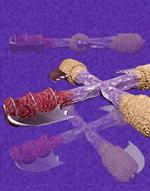 An Alien proximity mine which can move itself closer to any unit moving within its detection range by 'jumping in short hops' until close enough to explode. The pre-set proximity range is how close it will get to the victim then explode after the pre-set duration. It is used to chase any entity moving within its detection range (which cannot be changed). Flying units above or below the intelligent proximity mine will not be detected unless passing through the same level which will cause it to react to such movement. Any unit moving behind a wall will cause the boomeroid to hop closer but it will not explode until the bomb can 'see' the unit (eg: when a door opens).
Battlescape features (rubble, dead trees, etc.) may block a boomeroid hop motion and may cause it to get stuck. It will bounce on the spot if it wants to hop further.
Note: proximity range can be increased to 12m (5cells) if a Marsec proximity mine was set to maximum range (but not armed) immediately before arming a boomeroid.