Difference between revisions of "Entropy Launcher" 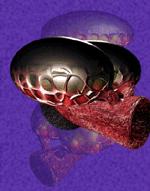 This exotic organic weapon is designed to specifically target armor and weaponry by dissolving them in an acidic-enzyme sludge. The ammunition uses homing ability to guide itself intelligently and when impacts, quickly reduces the durability of armor and may turn weaponry into puffs of grey smoke ...and detonates any explosive items ...and injures the unit if not killed outright by the explosions.
Personal Disruptor Shields will block any enzyme attacks until shields are destroyed.
Avoidance of the missile in flight is possible since homing ability tracks targets (the intelligent missile will weave between obstacles) but may not turn quickly to follow evasive units. Impact damage is weak but offset with its rapidly destructive effect which may be reduced by removing armor, weaponry, and explosives, just before being hit. Injury may still result but items will not be affected.
Note: accuracy of the weapon, or the user, is irrelevant since all weapons with homing ability track their target but the fire rate depends on the agent's shot-type.