Note that stun damage cannot be increased above 255, so Multiworms and other high-health enemies will need to be damaged in order to be knocked unconscious by any method. Note also that Micronoid Aggregates are totally immune to Stun Grenades. 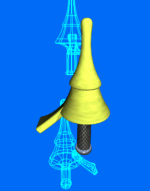