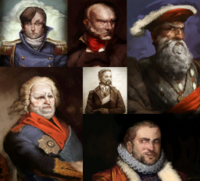 EXALT's base is a lesson in extravagance: paintings of their presumed leaders (as seen on the right image) and sculptures, luxurious furniture, wines, and large fur rugs (whose size suggests there are tigers and zebras about 10 feet long, shoulder to hip). As satisfying as it is to 'thank' EXALT for all the trouble they've given you by smashing everything, there are many unique artifacts that fetch a fair price on the Grey Market (or you can hold on to as a memento).

Given the actually fairly sparse skeleton crew of EXALT operatives (including the lack of air-dropped backup), and the scattered papers abound, it's evident that EXALT was aware of your approach, and had only just recently abandoned their base. Indeed, in front of the crimson Hologlobe sits a Big Daddy's Chair™ near a heavy seal on the floor (which could hide, for example, an escape shaft), but no sign of the one who sat there: you must have just missed him.

With their base compromised, and their computer data in your hands, EXALT is as good as dead-- at least in this form. But with their leadership still possibly on the loose, only time will tell if, or when, they will again make themselves known.