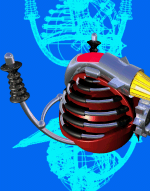 Human/Sectoid hybrids gifted with high psionic traits are commonly used as the best Psi-troops. Psionic manipulation of a target is a difficult exercise but is useful for combat support once a hybrid has undertaken prolonged psi-gym training. The unit targeted must be visible to the psi-trooper for the projection to start/work. When placed in the hand and selected, a representation of the user's psionic attributes are displayed with four buttons denoting each projection:

A probe of any unit will display their inventory and attributes. It is used to find a unit carrying strong explosives (dangerous threat), a unit with low bravery (easy to panic), and who should be mind-controlled (low psi-defence). A probe projection is instant but will deplete psi-energy over time if kept active.

A stun attack is dependant on time. It is used to temporarily disable an active unit which may be a dangerous threat in which direct fire is not possible and cannot be reached with grenades, any X-Com unit under mind-control, hostile flying units, and to assist in the capture of psi-weak aliens. Note: Any airbourne unit targeted by any stun effect will fall out of the sky once unconscious.

A panic attack is dependant on time. It is used to decrease the morale. Any targeted unit may start to panic once morale drops below half with a better chance to panic, the lower it goes. A demoralised entity is unable to function predictably and may start to run in random directions, fire off weapons without regard, and may run into view of hostiles. Once morale is decreased sufficiently, any further losses of other friendly units may again panic the victim.

A control unit projection is an instant effect. A difficult but powerful battlescape projection which allows a highly trained hybrid X-Com agent to temporarily 'steal' any unit, typically with low psionic defense. The unit becomes an X-Com agent ...until the projecting hybrid's Psi Energy depletes to zero, either is killed, or the turn-coat unit has been mind controlled by any other non X-Com entity.

Cancel An Active Projection
If a user wishes to halt a projection, select another projection but don't apply it to a target, or select the Mind Bender in an agent's hand.