The Laser Sniper Gun is very, very accurate and a very common weapon within Mega Primus; however, it is disappointingly weak and slow. Despite being the most accurate and longest range (non-missile) gun in the game, the Laser Sniper joins the Marsec M4000 Machine Gun collecting dust on a back shelf once Disruptors appear. 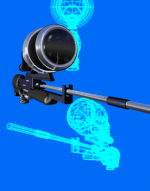