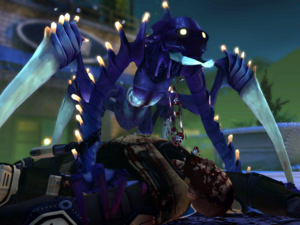 The Chryssalid is a savage murderous insect. Standing at about 5 feet, Chryssalids serve the alien forces as terror agents and are found are mainly found on Terror sites, though sometimes they can be seen defending larger UFOs or structures of importance to the aliens. They are one of the fastest ground units in the game and they use their deadly claws to attack any humans present (either XCOM or civilians) and kill or poison them. If the attacked human dies then a Zombie will be produced, from which a new Chryssalid will burst after a few turns.

Upon activation, Chryssalids will dash towards any humans on their vicinity. On Terror Sites, this means that they'll usually spread themselves out but on missions where no civilians are present the entire group will swarm towards your soldiers, which can work for your advantage by using explosives to weaken several of them. Their increased movement (about 12 tiles or squares) and their ability to leap to higher ground also means that there is no safety on heights or behind obstacles.