NOTE: This article contains endgame spoilers. Read further at your own peril.

The mission itself comes in two parts: "Mars: Cydonia Landing" and "Mars: The Final Assault". Each part has its own map, populated with different enemies; the crew you bring must complete both parts in sequence. But before that, of course, you must unlock the mission.

To assault the alien base at Cydonia, one must first know that there is an alien base at Cydonia. The path to find this out begins when X-Com interrogates a live alien, unlocking the research topic Alien Origins, which reveals that the hordes of UFOs assaulting Earth have a staging point somewhere in the Solar System. After this, interrogating an alien Leader (or Commander) will unlock the topic The Martian Solution, which establishes that this base is on Mars. Then, when an alien Commander is interrogated, Cydonia or Bust is unlocked, which gives the exact location of the alien stronghold - Cydonia. With this information, X-Com gains the ability to launch an attack on Cydonia and end the alien threat once and for all... assuming they have some way to get there.

One cannot simply fly a Skyranger to Mars. To reach Cydonia, X-Com must design a space-capable troop transporter. X-Com must first research the four key components of any UFO - Alien Alloys, Elerium-115, UFO Power Sources and UFO Navigation, unlocking the topic UFO Construction which leads to a series of craft. The last of the series, the Avenger, is capable of flying to Cydonia, and (provided Cydonia or Bust has been researched), a button labelled "Cydonia" will appear when choosing an Avenger's destination.

The above two items - an Avenger and researching Cydonia or Bust - are technically the only requirements to assault Cydonia. However, as the mission is far harder than any other in UFO: Enemy Unknown, and a failed Cydonia assault results in losing the game, it is wise to prepare rather more extensively. Below is a list of things you may wish to acquire before making the attempt.

Your Avenger craft has landed in the region of Cydonia on the surface of Mars. Our information indicates that one of the pyramid constructions contains a green access lift to an underground complex. Once you have assembled all your soldiers in the lift area, continue to the next stage…

This first part of the mission is similar to a UFO recovery or terror mission; an outdoor map with your troops starting in the Avenger, and small buildings dotting the map. In this case, however, the terrain is that of Mars' cratered surface, and the buildings are alien pyramids. The map is 50x50.

Opposition consists of Sectoids and Cyberdiscs, in numbers similar to those encountered on board a Terror ship. However, far more of the Sectoids will be psionically active than in such a mission. Note also that it is considered dark on Mars regardless of the time you launched the Avenger (normal rules for Night Missions apply).

There are two ways to clear this map; you must either find the unique pyramid with a lift down to the base proper (green floor tiles in the interior), climb inside and abort the mission (transferring all soldiers, tanks and equipment on said lift to the second part), or simply kill all the aliens (transferring all soldiers, tanks and held equipment to the second part wherever they are). 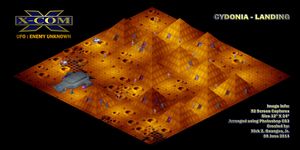 A random sample of the Cydonia Landing in Mars from PC version the game.

The pyramid lift takes your battle weary soldiers deep below the planet's surface. They arrive in the heart of a large complex of tunnels and chambers. The alien brain is hidden somewhere in the labyrinth. It must be destroyed if the earth is to be saved from alien enslavement.

The second half of the mission is very similar to an Alien Base Assault, with X-Com's remaining soldiers and tanks spawning in entry modules and having to navigate through a darkened maze filled with aliens. However, there are several important differences, nearly all of them bad for X-Com.

Note that, regardless of how long the war has gone on, the Ethereals at Cydonia will always be equipped with endgame weaponry - Heavy Plasma Guns and Blaster Launchers. 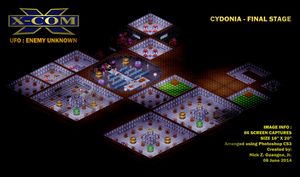 A possible Cydonia base in PC version

A random sample of the Cydonia base map from the PC version. 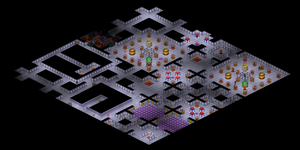 The underground Cydonia base in the Playstation version of the game.

Unlike in the PC versions of the game - which have a randomly generated base - the base in the Playstation version always has the same layout (see pic to the right). This has the important implication that you will always know the location of the Brain Room.

As this is the first time in X-COM which has a "mixed" mission, the programmers didn't quite get the substitutions correct per se. The proper aliens and ranks show up, but substitution was used in some instances where it wasn't necessary. For instance, instead of just spawning Ethereal commanders normally, the programmers substituted commanders for the missing engineer rank and instead of spawning Ethereal soldiers normally they substituted them in lieu of commanders.