For the original UFO: Enemy Unknown (1994) version, see Muton
For the version that appears in The Bureau, see Muton (Bureau) 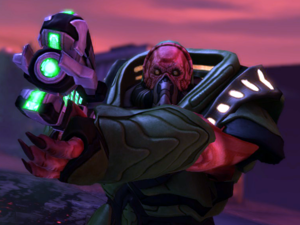 Mutons are among the most deadly alien creatures that XCOM will encounter. Tough, clever and loyal to their cause, do not expect a Muton to fall easily. Unlike most of the other alien species Mutons are team players - they work with a pack mentality and can use their Blood Call ability to strengthen the group while performing coordinated frontal attacks to wear down and kill enemy units. Despite their reputation for brute strength, Mutons are also one of the cleverest alien species in the game - they'll charge most of the time but they'll also retreat if outnumbered and lay Overwatch ambushes on advancing XCOM soldiers. In many ways, Mutons are the dark twin to human infantry, and are bane of XCOM: You would do well to exercise extreme caution wherever Muton soldiers may be present.

These brutal beasts can destroy the often ill equipped XCOM squads near the beginning of the game - without Laser weapons and Carapace Armor you will be hard pressed to win against them. Mutons will be the first aliens you encounter with grenades, which they will not hesitate to use if you have two soldiers together, however regular Mutons do not have the Bombard ability, so cannot throw their grenades any further than normal. The first month you encounter them they will be armed with Light Plasma Rifles, but in subsequent months will upgrade to medium Plasma Rifles and will appear far more frequently in tactical missions.

Mutons are very susceptible to psionic attacks, and once you have access to Mind Control can be as much of an asset to you as to the enemy.