Once a Tentaculat or Chryssalid attacks, the victim will turn into a zombie that becomes a new Tentaculat/Chryssalid if it's killed. Zombies cannot be stunned or captured.

Data corruption can provide a zombie research topic which crashes the game however.

Note: Not to be confused with Zombie, the user, longtime X-COM community member, tactician and number cruncher, or the Enemy Unknown equivalent. 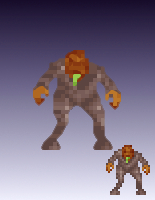 The following are some miscellaneous notes. Zombies: