Alien Terror Attacks, or Terror missions, have made a return from the original game. In this missions, the civilians will be spread randomly throughout the map. As you approach them nearby aliens will engage both you and the civilians. Each civilian lost counts against your final score. To rescue a civilian all you need to do is get close to them. Necessary proximity is indicated by a circle around each civilian.

The 4 maps of the 2nd column are the most frequent since the game will prioritize usage of maps not already seen on the present game and the maps on the 1st column are also used for Abduction missions. The third column indicates the additional Terror maps available on the Enemy Within DLC; the DLC also changes the probabilities of the maps in the 1st and 2nd columns appearing, giving maps all 3 columns the same chance of appearing during Terror missions. 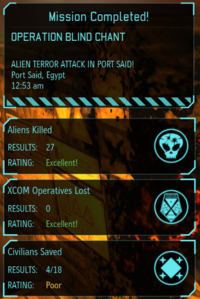 If you completely ignore or lose a Terror mission by aborting or having your whole squad killed, then the country will automatically leave the Council. Also, all civilians count as dead if you lose or abort the mission, even ones that you've rescued. If you fail to rescue any civilians then the country will also leave the Council. Failed missions will also raise panic on the entire continent by 2 points.

If XCOM wins a terror site, the number of civilians saved at the end of the mission will be classified according to the following criteria:

However, to calculate the panic reduction on the country and continent in case of a successful mission, the following numbers of rescued civilians are used instead: