As the masterminds controlling the Muton race, and apparently the leaders of the entire alien invasion, Ethereals are rarely seen on Earth. They will not ordinarily be encountered before July 1999, and will only deign to appear personally for the most important missions - building bases, spreading fear, diplomatic negotiations and attacks on X-Com.

The Ethereals' terror unit is the robotic, nigh-indestructible Sectopod.

Every member of the Ethereal race possesses very powerful psionic abilities that can be used to make X-COM forces panic. It is even possible for Ethereals to take control of X-COM units and use them against us. Only the most psionically resistant troops should be used against Ethereals.

The psionic prowess of Ethereals also grants them the ability to fly. This protects them from Grenades, and provides some protection from the Blaster Launcher.

Note also that while Ethereals have only moderate Health, they are exceedingly-well armoured. Plasma weapons are strongly recommended for skirmishes with Ethereals, as weaker weapons will struggle to harm them. 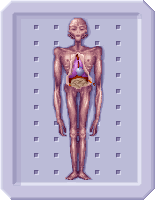