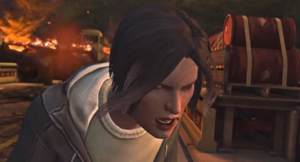 Operation Progeny is a new campaign on the Enemy Within DLC (EW) consisting of 3 linked Council missions, similar to the previous Slingshot campaign. Like Slingshot, Progeny is optional and can be toggled on/off when choosing the game options at start.

Progeny was created to be released as the 2nd planned standalone DLC for XCOM: Enemy Unknown but its release was cancelled after a general less than positive response to Slingshot and Firaxis decided instead to include it on EW. Thus, the narrative has suffered some changes from the original version to fit with the additions brought by EW to the XCOM universe, namely the EXALT and the Base Defense missions.

The campaign consists of 3 missions, called Portent, Deluge and Furies and revolves about a new French character, Annette Durand, who has a special power that makes her a target of interest for XCOM, the Aliens and EXALT.

The first mission, Portent takes place in April and the following missions, Deluge and Furies will only happen after the Alien Base Assault and XCOM Base Defense missions are completed. According to Dr. Vahlen, Annette is the reason behind the assault the XCOM HQ since the aliens managed to use her psionic powers to mass control XCOM personnel and allow the raid to happen.

After Deluge is completed, Annette will become an XCOM soldier at the Barracks, with a random class and the rank of Sergeant, and is guaranteed to be psionic when tested. Successfully completing Furies can also give you up to 3 additional soldiers, all at Lieutenant rank and all guaranteed psionics.