Tasked with the role of investigating and stopping the growing alien threat, XCOM started its operations on March 2015, under the motto "Vigilo Confido" (I am watchful. I am relied upon.)" 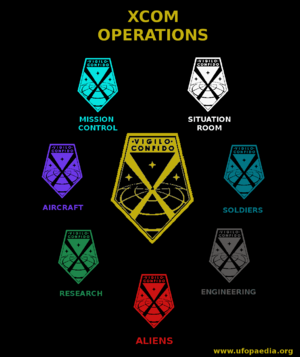 In order to execute the mission entrusted by the Council, the XCOM Commander has at his/her disposal XCOM's HQ and its resources to develop and implement a strategy to defeat the Aliens. The Commander will have to skillfully coordinate all its aspects of operations in order to achieve the victory conditions. XCOM HQ's operations against the extraterrestrial life forms are divided into six main areas: 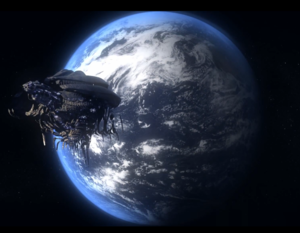 "Two possibilities exist: either we are alone in the Universe or we are not. Both are equally terrifying" - Arthur C. Clarke

In order for Earth to win the war against the Aliens, the XCOM Commander will have to use and manage wisely XCOM's resources in order to achieve two goals:

In order for Earth to win the war, XCOM will have to follow a strategy that allows it to complete both goals. If XCOM fails to achieve both goals Earth will be powerless to stop the alien invasion and humanity will have to surrender its fate to its new masters.

To help in the Commander on this task, the UFOPaedia and all the data it contains is at your disposition to plan a strategy to stop and defeat the alien invasion.