Friends in Low Places is a Council escort mission. Like all Council Missions, the mission is initiated by the player being contacted by The Council. You will be given a screen choosing to accept the Slingshot missions or a random Council Mission. Every time a council mission is offered if you do not accept the mission will also include this choice. However if you choose this mission, the next two council missions on EU (there is no such choice screen in EW, you have to enable Slingshot DLC while starting a new game) will be replaced with Confounding Light and Gangplank respectively. 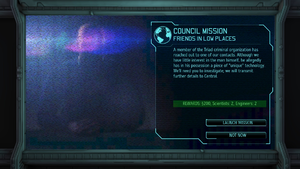 Enemy force is only partially present on the map at the start of the mission. As Zhang advances across the map additional enemies (the alien forces in encountered in this mission consist primarily of Sectoids and Thin Men plus a solitary Chryssalid* will drop into the map, typically on elevated positions in sight of Zhang. The newly spawned enemies typically use Overwatch as their first action. Their entrance counts as movement, and XCOM soldiers on Overwatch will react with fire often eliminating the enemy before they can become a real problem.
Zhang has 4 health and Head Down ability. He should be shielded from enemy fire and avoid burning vehicles at all costs.

* The Chryssalid is replaced with a Muton on Impossible in EU, Classic and Impossible in EW, and if the mission is under taken later on into the game. 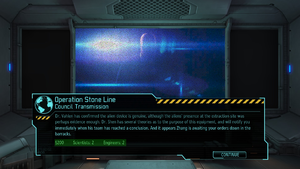 Additionally, completing the mission rewards the player with the "New Friend" Achievement and Zhang will join XCOM as a Heavy Class Lieutenant. As a Lieutenant, Zhang will likely outrank other soldiers at this point, meaning he will have a superior number of abilities and will unlock additional upgrades at the Officer Training School. Unfortunately Zhang does not have any customization available (can't change his armor decoration or color) on the regular Slingshot DLC. But in the Enemy Within DLC it is possible customize his armor color and decoration.