Gangplank is a Council mission. This mission will be available sometime after the player completes the mission Confounding Light. Like all Council Missions, the mission is initiated by the player being contacted by The Council. 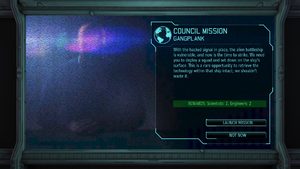 This mission takes place inside an airborne Alien Battleship which means the map layout is nearly identical to that of Battleships that can be encountered on UFO Crash Site or UFO Landing Site missions but with the unique exceptions of the six power conduits placed inside and the Chinese cityscape that can be seen passing below this Battleship. Additionally, the map "ends" shortly before the door to the bridge, so the large room before it is actually the final room of the level, as well as there being a few more of those "elevator beams" around the ship.

The alien forces encountered in this mission consist primarily of Thin Men who are present on the map at the start of the mission, and who will drop into the map as the squad advances. Additionally Sectoids and Chryssalids are encountered as the mission progresses; near the end of battleship you will meet a Cyberdisc and a Muton.

The power conduits can be deactivated, similar to the Power Nodes in bomb disposal missions (there is no time limit, so feel free to take your time), or can simply be blown up (no penalty of lost Elerium or damaged Generators if you do so, but an insignifcant notch less of Alloys for each destroyed conduit). Plus the Cyberdisc; grenades (particulary Alien Grenades from any captured Mutons in the previous Slingshot mission), and a Heavy, especially with HEAT, are recommended. As this mission can appear as early as the second month, Zhang himself would be suitable. 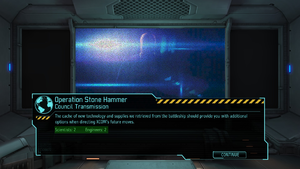 Additionally, completing the mission awards the player with the "The Bigger They Are" Achievement.