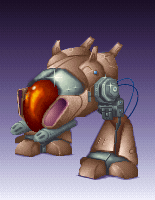 The Sectopod is one of the most dangerous terror units X-COM has come up against. Their armour is nearly impervious to all weapons fire, but they appear to be vulnerable to lasers.

Sectopods are seen in the company of Ethereals. As with all terror units, they can be encountered on Terror Missions, Base Defences, with a Terror Ship or Battleship, Alien Base Assaults, and finally on Cydonia. Beware; their weapon is a powerful laser with autofire capability, which can make short work of any enemy of the Sectopod in seconds.

Every Sectopod is completely identical and is built not only for self-sufficient commands and operation, but also psychic/psionic manipulation -- an Ethereal could potentially control a Sectopod as if it were it's own body, from millions of miles away.

If X-COM ground forces encounter Sectopods on Earth, it will usually be during a Base Defence, Alien Base Assault, or Terror Mission. Terror attacks by Ethereals are the most dangerous for both Civilians and X-COM units - apart from having to deal with their psionic abilities, we also have to fight against Sectopods.

Sectopods are robot creatures with a powerful plasma beam weapon. The control of these mechanical beasts is via a telepathic link to their controllers, the Ethereals. Sectopods are the most powerful terror weapon available to the alien forces. Note: it is not possible to capture one, the only way to get this report is to get it from a captured medic. Also, the ufopedia is lying... the sectopod uses a LASER weapon, not plasma. It just LOOKS like plasma. 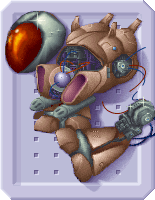 This robot is sturdily constructed with powerful armour capable of resisting most forms of attack, in particular plasma weapons. However, the sensing circuitry seems particularly vulnerable to laser weapons.