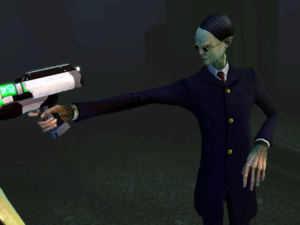 The Thin Men are agile, quick, and elusive alien creatures. Designed to look human so that they can successfully infiltrate society, their true reptilian nature is betrayed by their yellow eyes as well as the patches of scales around their necks and wrists (not to mention their unnatural agility). Thin Men are responsible for handling the more secretive operations of the alien invasion, although some aren't exactly subtle, such as planting huge alien bombs in the middle of urban centres. Their human-like appearance doesn't fool XCOM troops, who have no trouble identifying Thin Men as hostiles.

Thin Men are one of the deadliest units in the early game. They have increased accuracy and mobility, making them ideal for long-range sniping at your soldiers while moving to outflank them. Their Leap ability allows the Thin Man to jump incredibly high, allowing it to scale entire buildings and take up an elevated position. This can be very dangerous against Snipers who are unable to fire. Against soldiers in high cover, they'll make use of their Poison Spit to reduce their aim, mobility and possibly causing them to panic. Even upon their death they can be dangerous since they'll release a poison cloud that can affect any soldier that moves through it.