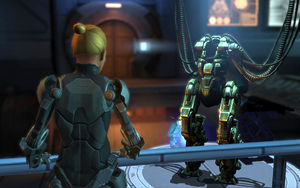 Instead of armor, MEC Troopers use the Mechanized Exoskeleton Cybersuit or MEC Suit. It is not possible to deploy a MEC Trooper without a suit. which can be damaged and need to be repaired. MEC Suits came with the Minigun as its default Primary Weapon: more advanced primary weapons need to be manufactured in Engineering before being deployed. There are 3 tiers of MEC Suits which can be customized, each unlocks a choice between two new tactical subsystems, allowing for 8 different builds of MEC Suits: