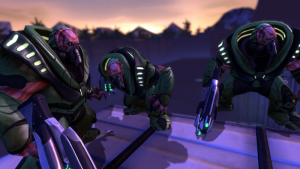 There are three main types of aliens present in the game: Commanders, Soldiers, Secondaries. Each pod (or group) of aliens will belong to one of these three types. 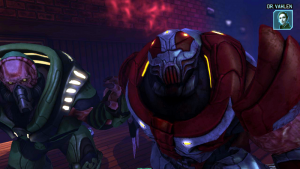 The type and number of aliens on each pod depend on 3 main factors: the month, the difficulty level and the type of mission.

When choosing between the alien species, each month the game will create pools of possible alien species for both the Soldier and Secondary pods. Each mission will have a certain number of Soldier and/or Secondary pods, with UFOs also having a Commander pod. Each species in the Soldier/Secondary pools will have a specific weight (show below as probability) of being chosen for each individual pod. On the next month the game will add new species to the pool and recalculate their probabilities of being randomly picked. The composition of Commander pods isn't listed below since doesn't depend on the month but on Storyline progression.

Some species have defined limits on the number of aliens that can be encountered during a mission; however, these only apply to soldier pods and Sectopods. For example, a (vanilla) June abduction mission will have 0-1 Cyberdiscs, but a Terror mission may have up to 5. On the Impossible difficulty levels the limits are removed, making it possible for 5 Sectopods to appear during a Terror mission.

If playing with Second Wave's Marathon option, the progression through the months of the number of aliens present during Council missions is delayed as listed below.

Finally, the Slingshot and Progeny campaigns and the XCOM Base Defense mission on the Enemy Within DLC don't follow the above table and it is possible to face more advanced alien species, but those missions won't affect the overall monthly progression of the regular missions. As an example, you'll only see Mutons in regular missions on May even if you face a Muton in April during Slingshot's Friends In Low Places mission.

The number of aliens present will also vary according to the specific mission type and difficulty level.

The higher difficulty levels of Classic and specially Impossible usually have more pods assigned and a bigger total of aliens present during the mission.

Aliens on Abductions will consist only of Soldier pods, while on Terror Sites the pods will be only of Secondary alien types. On the case of Abductions, there's a mission difficulty level which will be calculated randomly and displayed on the Mission Control selection screen. The Mission Difficulty rating will determine the number of aliens present during the tactical mission. Terror Sites will always have a Very Difficult rating.

If playing with Second Wave's Marathon option, the progression through the months of the number of aliens present during Council missions is delayed as listed below.

On UFO missions the game introduce the Commander type aliens, deployed as a single Pod, usually located at the bridge of the UFO, although its location can vary, along with Soldier pods in all UFOs, and Secondary pods on the larger alien craft from Abductor upwards.

The Commander pods composition depends on Storyline progression and their numbers will depend on the size of the UFO.

When the game is determining the final number of alien pods (excluding Commander pods) for each UFO it uses a special function (called ProcessPodTypes on XGStrategyAI class at the XComStrategyGame.upk file) that does the following:

As an example for the Battleship for Impossible difficulty:

Regarding the Commander pod, the game also applies a specific function: