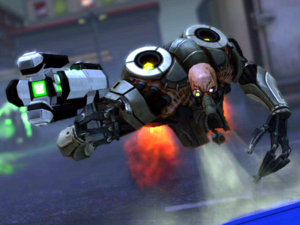 A twisted ball of airborne agony, the Floater provides close air support for the Alien forces. Unlike their older cousins from the original, these Floaters fly with powerful jet powered packs integrated into their bodies. They have pretty weak armour but they are very fast and agile. Their mobility makes them ideal for flanking.

They take advantage of their superior mobility and evasiveness to outflank even the strongest defensive positions. They can also use their Launch ability to drop down anywhere they wish on the battlefield. They cannot fire after launching though, leaving them defenseless if they drop into the middle of your squad. Be wary of your snipers though, they can be caught unable to fire if a Floater launches down to them.

You may want to keep a stock of their corpses on hand, as they are used for the useful one-use-each Defense Matrix module for your Interceptors.