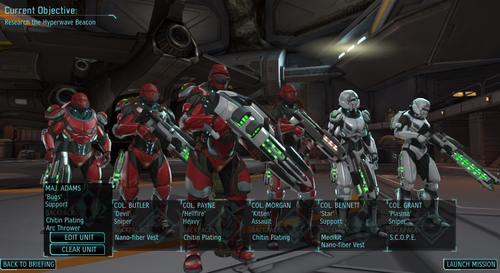 Squads composed of up to 6 units are the standard tactical unit deployed by XCOM in the battlefield. All squads have a soldier designated as the squad leader and it is possible to only bring 1 trooper to missions. The starting squad size will be of 4 units, although it is possible to increase this number through the Officer Training School. Squads can be composed of any soldier classes or even only 1 class and may also include S.H.I.V.s.

During the mission loadout screen it is possible (and advisable) to determine the starting position of the soldiers assigned to the squad. The below chart shows how the slots on the loadout screen correspond to tactical deployment. This setup applies to most maps, although there will be exceptions.

One of the squad's soldiers will be assigned the leader, and will have a yellow star imposed upon its rank icon. Its importance on during missions is that soldiers will have a lesser chance of panicking as long as it remains alive and uninjured. The leader is selected according to the following criteria:

The composition of a squad will depend on its number of abilities, their classes, individual soldier abilities and any equipment, as well as the presence of S.H.I.V. units, as well as the mission type and objectives.

The starting squad composition is the Assault, Sniper, Heavy, Support combination, although it can be a rare occurrence during the early game stage due to combat losses and injuries. It is usually required to build the OTS to increase the squad size and enlarge the pool of trained soldiers before more specialization is possible. After that the differences will be on the number of soldiers of each class present.

Since each squad may have up to 6 soldiers, it is possible to combine the squads described below, by fielding an Assault/Heavy squad or a Sniper/Assault squad, whichever suits better your playstyle.

Heavy squads have two or more Heavy soldiers and are useful on missions facing superior Alien firepower/numbers. They are focused on deploying their weapons, specially the Rocket Launcher against packs of enemies and dealing massive damage or removing their cover and leave the kill for the rest of the squad. The Heavy's primary weapons can be very useful for Overwatch ambushes against the weaker aliens, with the Rapid Reaction perk, or for close combat with the Bullet Swarm ability. It is also possible to bring two Heavies and combine together the Holo-Targeting and Bullet Swarm abilities if they are both present.

These squads are built around the principle of Scout and Snipe - scouting units move ahead to spot alien packs and remove their cover for the Snipers on the back to take out using the Squad Sight ability. They can be very powerful in open maps, specially if the Snipers are equipped with Archangel Armor. With two Snipers, both can either have the Squad Sight ability and be in safe positions, or, 1 has Squad Sight and the other Snap Shot, and most important, Battlescanner. Until you've researched and built Ghost Armor, Battlescanner is simply a life saver since it allows the Commander to quickly assess the situation ahead, without alerting the aliens to XCOM's presence, and determine the best way to engage alien pods.

With two or more Assaults, this squad is good for maps with cover that require/allow Flanking maneuvers or for fighting inside the larger UFOs. The Assaults can be used as a pair or separately, allowing for more pincer movements, although at a loss of firepower. Assault squads are also very useful on Bomb Disposal missions due to the Assault's Run & Gun ability - they can Dash, disarm a node and Fire/Overwatch, allowing for quick movement.

This squad is built upon the principle of squad endurance, with the Support soldiers responsible for injury/poison recovery (Field Medic) and squad security (Sprinter for Scouting, Covering Fire/Sentinel for sentries, Smoke and Mirrors/Dense Smoke for cover, etc.). Support squads usually have lesser firepower than any of the others but their advantage is that they are built to keep the squad fighting as long and effective as possible. They can also be fast squads for use on Council missions after Laser/Plasma weapons are developed and deployed since the firepower/armor isn't anymore an issue when facing the lower tier aliens.

Finally this squad is a mixture of two of the squads listed above, by adding 2 soldiers of different classes to the basic four. There's several different combinations possible, depending on the player's choices. These are the most common squads fielded because of their versatility.

These formations are used specially on open maps where there's more freedom of movement. Some sort of cover is usually required but that depends on the tech disparity between both sides - it's quite possible to deploy your soldiers out in the open and not risk KIAs, depending on the battlefield circumstances. There are three main types of formations: Wedge, Line/File and Fire Teams.

The squad axis of movement is the general direction(s) which the squad is moving within the mission's Area of Operations (AO). The axis is one of the main factors to consider when moving your squad in formation. It can be useful to set the game camera pointing upwards towards the axis to help remember the main route the squad is following. When deciding which axis should be set for a unit or the whole squad, there are different types of areas spread around the map to consider. 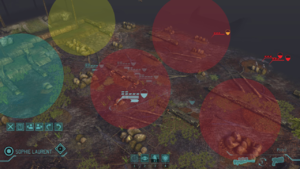 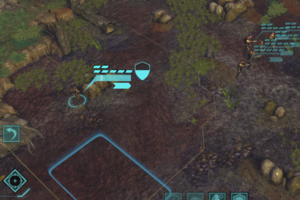 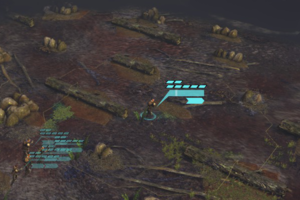 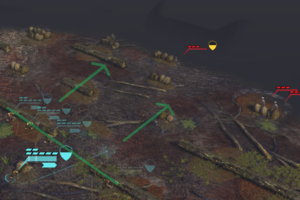 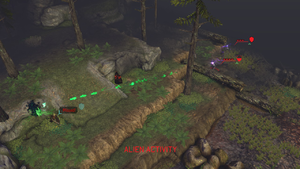 The cover locations should also not danger zones. In order to determine if a tree, van or wall is safe, consider the following:

When moving or firing a unit you should always consider the same principle defined in the Scouting section: your squad should move and fight as one. There are exceptions to this rule, but the key aspect is that all the moves should be coordinated and the 2 actions of a unit shouldn't be used one after the other. As an example with a 4 soldier squad (Heavy, Assault, Sniper, Support):

This way you can combine the synergy of the different classes and their abilities together more efficiently, without taking unnecessary risks. 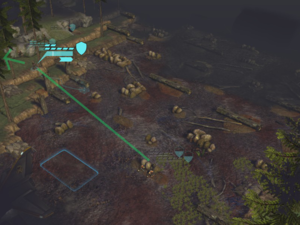 A File is used to retreat from a bad position or to quickly reach a map position. 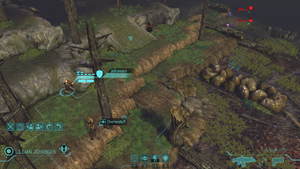 Many times the question is "when to retreat" after you've encountered several aliens or started suffering casualties. To evaluate the situation you should consider how many enemies will be left standing, after you've played your turn, according to the the following guidelines : 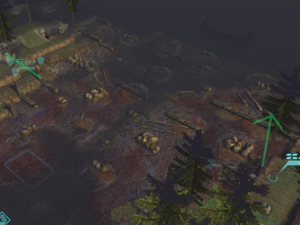 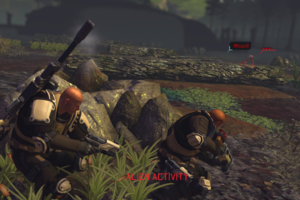 Use of Fireteams also provides the opportunity to catch advancing enemies on Overwatch traps while retreating. While the forward element of the Squad dashes to safety, the rear element can set itself in positions where it can safely Overwatch without the risk of drawing fire from several enemies. This tactic can be difficult to master because it will also depend a lot on the characteristics of the aliens encountered. Sectoids, for instance, will usually retreat if they are fired upon while advancing, but Mutons will play more aggressively and melee/robotic units like Chryssalids, Berserkers, Cyberdisc or Sectopods will simply advance or fire upon the rear element.