Zrbite is the aliens' power source and is a near-equivalent to the Elerium-115 used in the previous alien war.

Although constructed from different materials, its usage is identical in that it powers all alien weapons and craft. X-COM can use Zrbite to manufacture advanced equipment as well as to fuel hybrid submarines.

Zrbite cannot be manufactured and can only be recovered from Alien Submarine Assaults or Colony Assaults. Selling Zrbite is therefore not recommended unless a reasonable stockpile is available or a regular source of Zrbite has been found.

In the Battlescape, Zrbite appears as a small yellow bar; if an object occupies the same tile, the yellow bar will be superimposed over that object. In the inventory view, Zrbite appears as a 1 × 2 crystal. Each of these crystals is converted into 50 Zrbite if recovered intact; it bears noting that they are quite fragile and will be destroyed by nearby explosions. Zrbite can be picked up by an Aquanaut standing over it; this is not a preferred method of recovery, however, as Zrbite is usually found inside an object and some of these objects will explode - destroying the Zrbite - if blasted open during a mission in an attempt to retrieve their contents.

This item only appears in Terror from the Deep. For the UFO: Enemy Unknown equivalent, refer to Elerium-115. 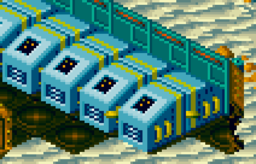 The best way to accumulate Zrbite is to assault intact Alien Submarines rather than submarines that have been shot down. When shot down, the detonations of the Ion Beam Accelerators have a tendency to destroy the Zrbite. However, unlike Enemy Unknown/UFO Defense, Zrbite is not exclusively stored in the sub's power source and may be found in different locations around the ship. This means that some of the Zrbite on certain vessels may remain intact even if the Ion Beam Accelerators explode.

One example of this is the Cruiser. As the Zrbite is stored in the tail of the ship, well away from the Ion Beam Accelerators, it will not be destroyed no matter how badly the Cruiser is damaged. As this alien sub appears on all Alien Missions, it provides a reasonably reliable and low-risk way to obtain Zrbite.

Another method of reliably obtaining Zrbite is to find an intact Alien Colony and perform Alien Submarine Assaults on the Fleet Supply Cruisers that land there. Note that these alien subs are challenging as the enemy crew will be supplemented with Disrupter Pulse Launchers. The high risk does provide a suitably high reward in the form of 150 Zrbite and a lot of gear and experience.