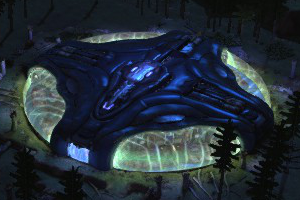 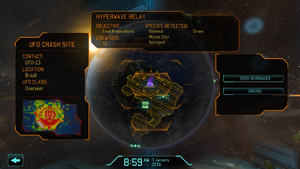 The UFOs deployed by the aliens range in size and on their individual missions. The exact aliens each craft carry can also vary considerably due to timeline, story progression and difficulty level.

For additional UFO information, see the links below and the maps section for the appropriate UFO. For the UFO stats related to Air Combat see Craft & Armament Stats.

The amount of aliens on a crashed UFO mission will always be lesser than on a UFO that Landed UFO on its own.

UFOs came on a variety of types and some will only perform specific missions, with their generation determined by the A.I. game objectives. Each mission will be generated by the A.I. and then a UFO will be assigned, either predetermined or random. It is possible to see the UFO's specific objectives after building the Hyperwave Relay in HQ.

Each month the A.I. will create several missions in order to achieve the following objectives:

To achieve the previous objectives, the Aliens (a.k.a. A.I.) make a monthly plan of missions that is checked and updated every half hour of game time. This includes generating a country list to determine possible Abductions targets, along with any countries marked for a Terror Site. The aliens schedule also includes all the missions where UFOs can be detected, or ones taking part in Harvest Live Specimens, Scout Target or Final Preparations missions, and finally, any future Council missions.

Detected UFOs can have several flight modes, depending on their mission:

A UFO's flight plan will consist of several of these modes, depending on its mission. A Flying UFO has 5 modes: Arrival, SpendTime (usually about 4 hours), FlyOver, Departure and Liftoff. However, once the UFO is intercepted but not shot down it will immediately switch from SpendTime to Flyover to prepare itself to leave the Earth's atmosphere.

This mission can only happen if you ignore an airborne UFO or landed UFO, and is a good way of getting more Battleships in order to harvest more Fusion Cores for Blaster Launcher production. If the UFO is shot down, it is possible to launch a Crashed UFO ground mission to recover the craft.

A few days after the 1st UFO, a 2nd will be generated that will hunt the satellite over the country where the previous flyby took place. You will be told by Bradford that there's a new contact that gives off a distinct signature, "as if it is looking for something". The are only two types of UFOs used on this mission:

The alien artifacts that can be gained from ground assaulting the UFOs are also highly variable, depending on UFO size with heavily damaged and crashed UFOs giving lower salvage versus a pristine Landed UFO (higher numbers). Destroying UFO walls by use of explosives or stray shots will further deduce from the amount of salvage, as well as fires started by weapon fire or Cyberdisc explosions will eat up walls and even destroy UFO Flight Computers or UFO Power Sources they come in contact with, also reducing the amount of salvage.

The larger components of UFOs also have defined percentages for surviving a crash:

Each UFO will be manned by aliens, consisting of a commander type unit (Outsider, Sectoid Commander or Ethereal) and additional aliens. Their total numbers depend on the status of the UFO, landed craft will have more aliens present than a crashed one, and the size of the UFO. Larger UFOs (from Abductor above) will also have some of the larger alien species such as Berserkers or Sectopods. It is unknown the effect that EMP Cannon has on crew numbers.

For complete numbers and types of aliens during UFO missions, see Alien Deployment.