Tactical missions are XCOM's main operations and can be generated through either Mission Control or the Situation Room. Each mission will have a codename, and will have a Brief and Objectives for XCOM to achieve. At the end of the mission the XCOM Commander will be shown an After Action Report detailing the success/failure of the mission. 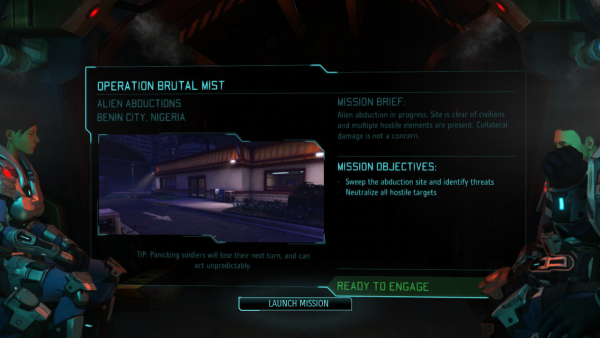 Missions involving alien invaders are the bread and butter of XCOM. You'll be asked to either stop alien activity in specific countries or to recover landed/crashed UFOs. Ignoring these missions increases the panic level of the country, and usually also in the continent where they occur, with the exception of Crashed UFO sites.

Council missions will appear periodically and you'll be given resources (credits, soldiers, etc.) in exchange for completing these missions, in addition it may also reduce the panic level of the country where it takes place. If failed or ignored most missions will also raise panic on the country, and, in Impossible difficulty, on the entire continent.

The most difficult Council missions are usually the Bomb Disposal sites because of the time window involved to deactivate the alien bomb. After a player has reached the mid/late game the Council missions will turn into training runs since your advanced weapons and armor will be more than a match for the usual Thin Men found in those missions.

Slingshot is a DLC available for Enemy Unknown which consists in a campaign of 3 Council missions that unlock a playable soldier Zhang along with additional salvage. The Slingshot missions will only be offered once in the first month of the game and you'll be given the choice of taking it instead or a regular Council mission. After each mission appears available on the Situation Room it is possible for the player to delay it indefinitely by choosing the 'Not Now' option.

On the Enemy Within DLC, the Slingshot campaign has been pushed to a May start, instead of late March.

These are special Missions that you'll need to complete in order to progress in the Storyline. Failure to complete certain missions will be considered a game loss. There are five Storyline missions, although the two Tutorials are optional at game start.

In addition to the ones already mentioned above, the Enemy Within DLC introduces several new missions.

Covert Operations missions that become available on the Situation Room after EXALT appears in May. Covert missions will be available until the EXALT base is destroyed.

Progeny is a Council campaign of 3 missions that is optional at game start. It can be played in the same game with Slingshot campaign also activated, or as a solo campaign.

The majority of the tactical missions will be generated periodically by the game upon certain definitions on a monthly basis. It is possible to ignore those missions but it will usually have negative consequences as panic will increase.

Storyline missions don't have any time requirements and can be completed at the player's discretion. However, the Alien Base assault can alter the frequency of Abductions, Terror Sites and UFO missions.

Before Alien Base Assault

After Alien Base Assault

A list of Council missions and their rewards can be seen at Council Missions.

For a detailed explanation of the appearance of EXALT see EXALT Cells and Covert Operations. 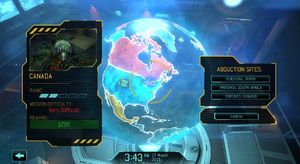 Each mission will have a window of opportunity of 1-2 days, specific values below:

The overall difficulty of a mission depends on the number and type of aliens present in a mission and the Difficulty level. For a detailed breakdown of the numbers, check Alien Deployment.

Abduction missions will appear with individual difficulty levels of: Easy/Moderate/Difficult/Very Difficult. These give an indication of the total number of alien and the number of alien "pods" (groups of 1-3 aliens) present on the mission. The individual mission difficulty is a number calculated with the following steps:

On Abductions, the type of the rewards is randomly chosen when the mission appears, while on Council missions the rewards are predetermined.

If using Second Wave's High Stakes option then the rewards are randomized as the following:

On the Enemy Within DLC, the Covert Operations missions will give either §100 (Covert Extractions) or either §100 or §150 for Covert Data Extractions, depending on if the Encoder has been destroyed or retrieved intact.

The Progeny and Slingshot campaigns have predetermined rewards for each mission, see Progeny vs. Slingshot. Finally, the salvage from UFO missions is calculated separately.

For detailed information on the actual probabilities of seeing an alien species during a mission, check Alien Deployment.