For the original UFO: Enemy Unknown (1994) version, see Sectoid
For the version that appears in The Bureau, see Sectoid (Bureau) 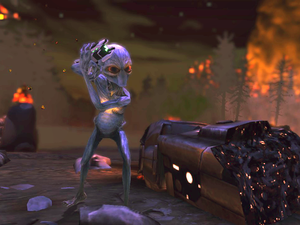 The Sectoids are a small, grey alien race. Every Sectoid is a perfect genetic copy but some are chosen to command the pack with deadly psionic abilities. They are augmented with cybernetic implants to support their frail physiques in combat situations. They are usually the first alien species encountered in combat by XCOM's ground forces. Sectoids can be found throughout the entire campaign, although they'll appear less and less as more advanced alien races are deployed.

Sectoids are physically feeble. However, these little grey aliens are proficient in the use of deadly psionic powers to merge minds with their brethren and improve their health, accuracy and critical chance.

Their tactics will change according to their numbers: while a lone Sectoid will usually retreat when outnumbered and prefer instead to conduct Overwatch ambushes, they'll also press forward and try to outflank your soldiers when several of them are active.

You may want to keep a stock of their corpses on hand, as they are used for the useful one-use-each Targeting Boost module for your Interceptors.