In order to progress and eventually win the game, the player must win a number of specific missions in the game's Storyline. 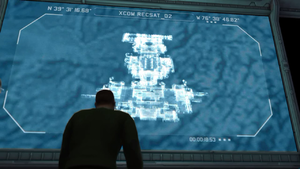 Check the Temple Ship page for overhead shots of the entire map.

With the death of the UberEtherial (and after any last Mind Controlled aliens time out), your long mission is at an end... if not for the Ethereal Device overloading without it's controller or the alien collective feeding off of it: the Volunteer gets a vision of the Device reaching it's Schwarzschild radius and collapsing into a Black Hole, eating the Temple Ship, the Skyranger, cites, people... and the Earth itself. Commanding the rest of Strike 1 to retreat to the Skyranger, and the pilot pulling out, the Volunteer interacts again with the Ethereal Device, and manages to get the Temple Ship into space. At a safe distance, the Volunteer commands the device to rip itself apart, obliterating the Temple Ship.

As the burning fragments of the Temple Ship burn up in re-entry, mimicking the opening cinematic, humanity breathes a collective sigh of relief, and watches in wonder as the fiery shrapnel falls around the world, as if they were fireworks in celebration of the end of the War.

What will become of XCOM, and of the soldiers altered by cybernetics, genetics, and psionics? And of any remnants of EXALT that may still be in hiding, and any alien or their ships that may yet hide in the void between the stars? Only time will tell...