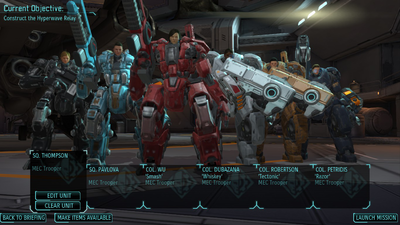 As a living mobile weapons platform, the MEC Trooper has a significant level of customization over the normal human soldier, and far more than the SHIV. Their main drawback is their cost in Meld, and this is what will most influence how high you can upgrade their suit, and restrict you from building multiple suits to try out all options.

On the side of overwhelming attack: the Kinetic Strike Module is the most consistently powerful weapon you can get (particularly with the upgrade glitch), and the Grenade Launcher and Proximity Mine allow for long-distance demolition. The Mines and Grenades (from your MEC or other soldiers), used in tandem, can be used to set off an improvisational 'cluster charge', where each Mine and the triggering AoE attack individually does damage to anything in the area (in fact, if an alien is unaware, or kind enough to stay still long enough, even the mighty Sectopod can be brought down in one massive fiery blast. Or instead of the Mines, the Electropulse offers a close-range AoE attack, that will stun robots, particularly said Sectopods, allowing other soldiers to whittle it down enough for your MEC to make the killing stroke. This build being in the thick of the action, a MEC suit driven by a former Heavy or Assault is probably ideal, with Fire Control and Reactive Targeting giving a powerful Overwatch, supplemented by Vital Point Targeting. Expanded storage means more explosions, and the Jet Boots means anything not flying is in range for getting punched in the face. Ultimately, this build is for smashing through enemy defenses, exposing them to your other soldiers: ideal for if blitzkriegs are more your play style.

For a more supporting role: The Flamethrower is a good directed AoE attack that can scatter enemies and give you a bit of breathing room for your other soldiers coming up from behind. A former Sniper can then give accurate covering fire, or a support for a local defense boost to allies, who can then be healed (along with themselves) by the Restorative Mist. With these being rather limited range, Mines would be good for reliable long-distance attacking. Or with the Electro Pulse, you'll need to remember to keep them on the front lines, particularly when Sectopods come a-knockin'. Threat Assessment and Damage Control may soften the hits they take, and this build does well with either Repair Servos, or Expanded Storage for more Mist. Absorption Fields are best used with Warden Tanking (and thus, may preclude Mist). With the Flamethrower for making organic enemies panic, and Electro Pulse for stunning the robotic ones, this build is good for corralling the aliens and preventing them from pinning you down.

Consider if you're early or late in a campaign:

With Medals, it comes down to how often you'll be using their main gun: if you're usually up front, punching aliens and EXALT Agents into a fine slurry, or only using the main gun for the AoE attack, defensive medals are good to take up the inevitable plasma barrages going their way. If you're burning up their gun's smaller clip, attack-focused medals help in making those shots count, as having an empty gun with enemies still alive means either reloading out in the open like an idiot, or risking any possible overwatch shots in retreating, and again when coming back out.

Remember that MEC Troopers are not affected by Training Roulette-- but they are by Hidden Potential, with growth like that of an Assault. So, if you're usually using the main gun as stated above, convert a Colonel Sniper, while a Heavy convert should be done as a Squaddie, for the sake of the highest possible aim score.