Mission Control is the facility at Headquarters where XCOM: Enemy Unknown's Hologlobe is located. The Hologlobe (a.k.a. Geoscape in the original game) is the 3D real-time representation of the Earth (and Moon) used by the XCOM Commander to send aircraft and soldiers on missions and to track the evolution of the fight against the current alien invasion. 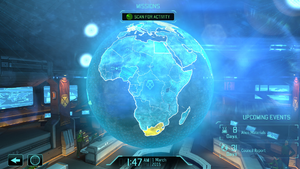 Using the Hologlobe the XCOM commander can Scan for Activity and/or wait for upcoming Research or Engineering reports. The Geoscape will also show unexpected events such as detected UFOs, alien attacks in progress or Council missions. The world view will also display any missions in progress, such as air interceptions and your Skyranger transport craft either on their way or returning from ground combat missions.

The Mission Control facility is run by Officer Bradford, call sign Central, an NPC character that will notify the XCOM commander of the arrival of any upcoming reports or events, as well as advising him/her on any mission matters. 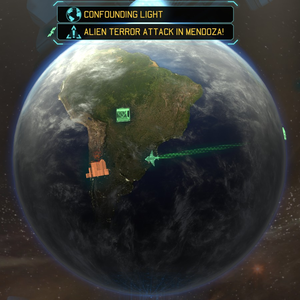 A number of 3D icons will be displayed by the view, depending on the view:

The right side of the Hologlobe will list the number of days remaining until projects are completed or other any other upcoming events. Upon reaching the specified date the player will be informed of the event's results by the relevant XCOM department. Upcoming events are those created by the player.

The majority of missions and other Council events are created by the game's A.I. and will appear without previous warning. The AI will check and update the strategic situation every each half hour of game time, and generate alien missions according to its planning and to the Storyline progression. On the Enemy Within DLC the A.I. will also plan and conduct EXALT operations.

For specific details on how the AI generates missions, see: 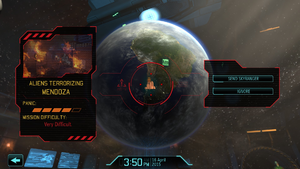 After a mission is generated, it can be of two types.

Any available ground missions will be displayed at the top of the Hologlobe. Clicking on any mission will show the country and type of mission, along with its difficulty level and any additional rewards (credits, soldiers, scientists, engineers) offered for completing the mission. If the option 'Launch' is selected then the player will be brought to the Hangar where he/she will be able to select and choose the ground squad. 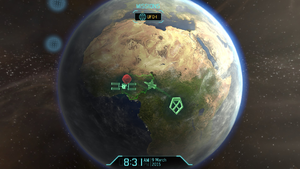 Air combat between XCOM's Interceptors and the UFOs happens when XCOM's Satellite network detects an incoming alien craft and a fighter craft is sent to engage it. The following air combat can occur on any of these circumstances:

Whenever air interception occurs the game will open an window for the resulting Air Combat.

The Hologlobe also displays the 16 Council countries which directly contribute to XCOM and thus in turn need to be protected. Each nation provides resources which may be increased by deploying satellites above that particular country and exhibits a panic level between 1 and 5 (5 being the worst). These countries, their satellite coverage and associated panic levels can be seen in the Situation Room and are listed here, divided by geographic areas:

In addition to the countries of the Council there are other nations appearing during the game. However, their overall impact in the game is limited to recruiting soldiers from those nationalities.