I thought I put in an explanation... must've been on the wrong page. I was thinking we need a way to normalize the difficulty level and the number of scientists. We could try to list it in short form (Classic & 5 scientists) result in a Normal (8 days) time. We could also just cite the code numerical values. Or something completely different. We also need to find a way to simplify the prerequisites; late game research is going to end up with a long list, unless maybe we just cite the last highest one and everybody assumes you need all the stuff under it to get there of course. Robbx213 21:47, 10 October 2012 (EDT)

I think it's too much information for one page. We can either create pages for the 9 research areas (where you receive bonuses from live interrogations) or we start making individual pages for each research topic. Hobbes 22:22, 10 October 2012 (EDT)
I'd actually like to see a page for each topic that goes into detail for each item (pictures, cross-referenced chains, production information, information on associated research credits, extended tables to determine research time, etc) while having the main Research page provide a general overview. Possibly in a small table format listing the topic, how it is obtained, and minimum number of scientists for it. That way people would have the basic information readily available while keeping any spoilers hidden. ~ Drakalu 02:12, 11 October 2012 (EDT)

A prerequisites always only refer to the closest lower branch, not list all research projects up to that.

True, but some of the mid to late game projects seem to require more than one technology to be researched prior to it becoming available. Firestorm is one example.

"C+5" is ambiguous and hard to understand. Better to list all costs and times at normal difficulty, and then either write out the difference (Classic: +2 days) or the acutal number (Classic: 8 days).

I don't think Results should be listed on this page at all, since it kinda spoils to much. Better to use this page as a springboard to other pages (perhaps individual pages) with more specific data. --Kokkan 07:06, 11 October 2012 (EDT)

When we go with individual pages, we can just create a Navbar for easy navigation between the pages. I already thought of doing 1 for the XCOM subsection of the table, with the major pages.

Kokkan, do you have a template for navbars? I thought of using one of the old ones from the original game section but I remembered that you may have something better. Hobbes 09:39, 11 October 2012 (EDT)

We don't know the baseline for most of the research techs yet, aside from the starting ones. Keeping track of the difficulty, number of current scientists, and number of days from multiple sources is the only way we'll be able to determine the base time and time decrease/scientist. I like the navbar idea and figured it would be added later after the meat had been added to the sections. ~ Drakalu 10:02, 11 October 2012 (EDT)

I'm down with the idea of keeping the main page simple and going into difficulty-specific detail, resulting unlocks, storyline progression, etc. in a dedicated page. Robbx213 00:59, 12 October 2012 (EDT)

I love the idea of having everything on one table but after it's complete it will be better to split it up but with a navbar for all Research topics. We're also missing a discription of how research works, the bonuses, etc. Hobbes 10:44, 15 October 2012 (EDT)

Might I make a suggestion for the research time issue? I noticed the current way is by listing current scientist number and difficulty level, but an easier way to look at it would be to simply list the total scientist points required for completion. (As in, weapon fragments takes 8 days to research with 5 scientists. So Weapon fragments require a total research effort of 40 points. Going from 5 to 10 scientists brings the time down to exactly 4 days rather than 8. 40/5=8 40/10=4 and so forth. This is before credits apply of course, but a note can be included to reduce the time in half in such a case. I don't believe difficulty has any effect on research times. And i am unsure about how credits/labs/stacking credits applies to the base point requirement if more than one is present, but saying 40 scientist points seems a bit easier than 8 days with 5 scientists on classic. A scientist generates one point a day. This does allow credits, and labs to be factored in very easily. The Sectoid Beam Weapons credit applies the 50% less time modifier. So 40 points would simply reduce to 20. This system would also work with a lab added with the 50% credit, but i have no idea yet how they will stack. It could be a 20% and 50% from the initial base of 40 points to reduce it to 12 points, or it might be a 50% reduce to 20 and then the 20% to bring it to 16 points. Wolf 01:44, 18 October 2012

Went ahead and changed the research cost system to something vastly easier. Wolf 22:19, 21 October 2012

Looking at it now, I think my little 'formula' for the time required may be completely off. I'm not even entirely sure how the lab n' adjacency bonus is calculated (thee labs and the gene lab in a square reduces project time to roughly 40%, so someone else feel free to take a crack at it. --Xuncu (talk) 03:06, 1 March 2015 (EST)

We need to come up with some new policy for this. I've already noticed a few spoilers (I already know the game end from the demo files) and I think it might be nice to have this info somewhat buried and concealed so that you really have to dig it up (and not see a spoiler by accident). What do you guys think Hobbes 14:52, 11 October 2012 (EDT)

I personally don't care about spoilers, and if people are coming here I think they either already know what they're looking for and want to do a comparison, or they're seeking out spoilers (or at least advanced info) to decide what they want to do in-game, if they want to buy the game, etc. Robbx213 00:57, 12 October 2012 (EDT)

I feel the same about wanting to know spoilers but there's a lot of visitors/users who will want information to progress on the game, but not details on the final mission. I know how the game ends but I skip any details about the storyline missions (specially the last one) until I try it on Classic difficulty. Hobbes 12:02, 13 October 2012 (EDT)

There must be something else that unlocks Titan Armor research. Probably something to do with Floaters? I went straight for Carapace early game and only got Skeleton Suit. Robbx213 00:56, 12 October 2012 (EDT) 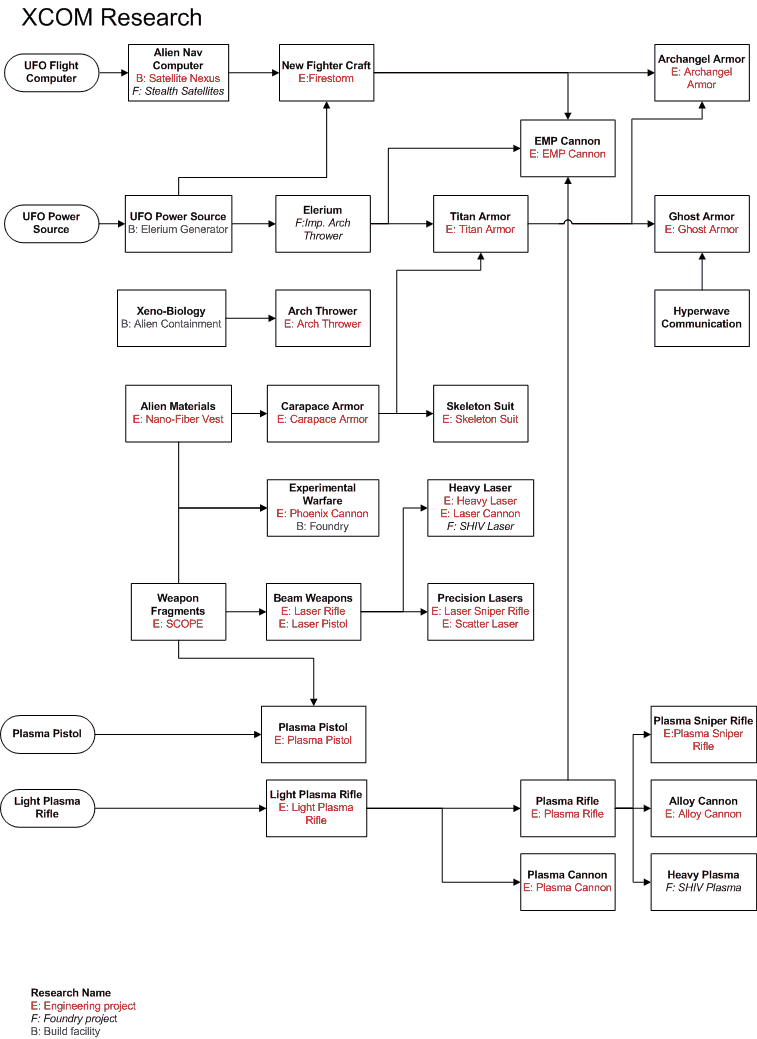 1) guess we'll need to update those tech tree images. 2) someone who knows how to see the game code check me on what I added in the notes? C) It's a material cost minimum to start a research project, but they're not actually consumed untill completion? ie; "triple-dip" the same handful of fragments just to get the research points in?

Hm, might give it a shot myself at making a new tree, but for the record; I used XDude's the most, as it's the best design visually (directional, shows "types", and big/spread out enough to see paths clearly while small enough that people on smaller screens can still see the whole thing without the shrinking making it illegible), while Nite's format was the most complete and efficient (if crazily tall). Otherwise, I may go over the top and make a Flash of the whole goddamn thing, with dropdown info and such (I think I could even program a point requirement calculator into it), if I get the drive to do so (don't count on it). --Xuncu 00:20, 4 December 2013 (EST)

Once thing I will say about yours is that it is great, but Major comes after Captain so should probably be swapped on the OTS bit.--Ditto51 15:55, 4 December 2013 (EST)

Kokkan, I've added the images to the Excel file but I'm clueless on how to make a png file out of a xlsx file. Can you give me some pointers? Hobbes 17:47, 4 December 2013 (EST) 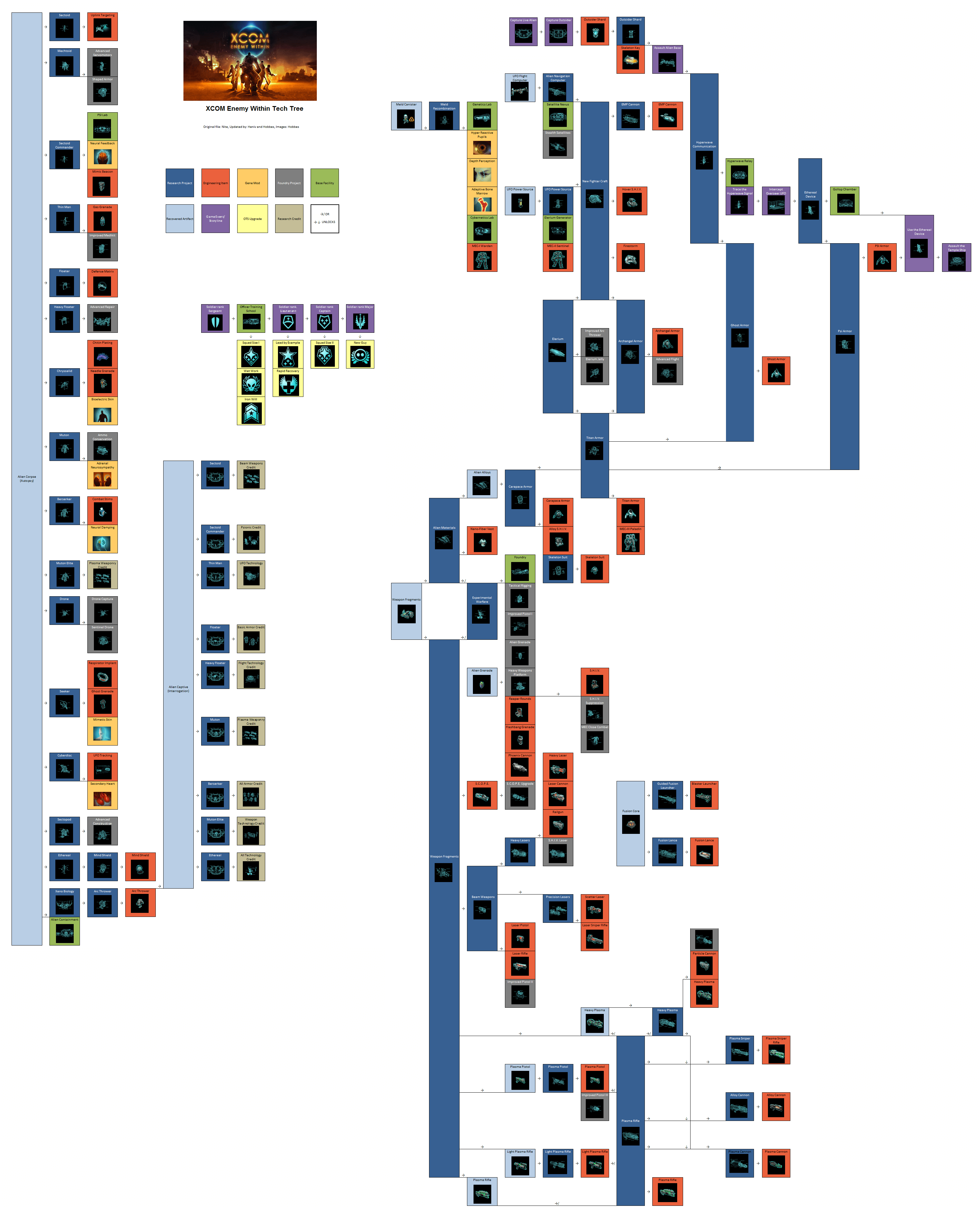