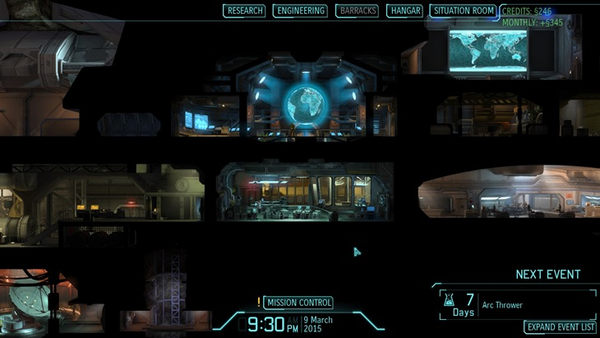 In Enemy Unknown (2012), the Headquarters is the single base from which you fight an alien invasion. Nicknamed the Ant Farm by the design team, the base is presented with a side view cross-section that allows the player to access the main game options.

The HQ view displays the Time and Date, the number of Credits(§), Monthly Funding, Alien Alloys & Elerium & Meld (if any) and an Event List. It also allows the Commander to quickly access XCOMs six main areas of operations and their options through the following buttons.

The base holds all of XCOM's resources and manpower available for Research and Engineering. Those are as following:

In Engineering you may build additional facilities to expand your base. The base has 24 expansion slots available underneath the starting facilities. The position of some facilities in relation to one another will provide bonus to their output. Most slots must be excavated (5 days, §10-§80 depending on the depth) in order to build a new facility. Facilities may also be dismantled for §5. The lower base level ground bonuses are randomized for each game. Maintenance costs are only included in your monthly bill after completing a facility's construction.

Non-unique facilities require more manpower (Engineers) as more of the same are built. This increase does not apply to the power facilities. After researching Advanced Construction in the Foundry it is possible to build facilities in rush mode. It requires twice as much of money, Elerium and Alloys but shortens time by 50%. Unlike everything else that can be produced in Engineering, the price and item requirements do not lower based on how many Engineers you have.

An example of ideal base layout in Enemy Within

Be considerate of the available expansions slots you leave in the long-term. As an example, building several Satellite Uplinks for an overall lower monetary and resource cost than a Satellite Nexus. However, the Nexus takes up less physical space. As you near the end of the game you may run out of space and have to remove facilities, so utilize your space as best possible. Depending on factors like Steam Vents, Research, Satellites and so on, you will have to decide what to cut back on. Also note that you do not have to build facilities sequentially out from the Access Lift; you need only excavate out to the slot in which you want to build a facility (i.e., all the slots between it and the Access Lift are excavated but may be empty).

The position of the facilities in relation to one another will provide bonuses to their output. For example, building Labs next to each other provide an adjacency bonus that increases the speed of research. Note that a facility next to two other facilities generates two adjacency bonuses. For example, four Satellite Uplinks in a 2x2 square would allow 12 satellites (8 regular + 4 bonus). A green plus symbol on the dashed border between two facilities in the Build Facilities screen indicates an adjacency is in effect.

For Enemy Within, getting the Foundry, MEC Lab (even if you don't plan to use MECs), and two Workshops up as soon as you can is a good investment: it's the easiest and earliest way to get a 40% Credits/Alloy/Elerium return on all builds (plus any from additional workshops) from then onwards, which makes base construction less of a drain on your resources.

Steam Vents can be present on the 3 lower levels of the base and their location and number (max: 3) will be random for each game. Building Thermo Power Generators on them will provide additional power for new base facilities. Which leads to:

The core amount depends on difficulty: 42 on Easy, 37 on Normal, and 30 on Classic and Impossible. For the latter, a Geothermal and two Elerium Generators will give 80 extra power points (plus another 4 if adjacent), for a total of 110 (or 114), while on normal, a Power Generator in place of the Thermal, plus adjacency, will get 107 total. Either will give more than the 105 needed in the example base layout shown. Of course, your power needs and capacity at any given point during a campaign will depend on what you have built and what you can afford.

There is a bug in which that the difficulty can be lowered from Classic/Impossible to Normal or Easy, a facility can be ordered for construction, and then the game returned to the higher difficulty: the power will obviously be 'overdrawn', but facilities will operate as usual.