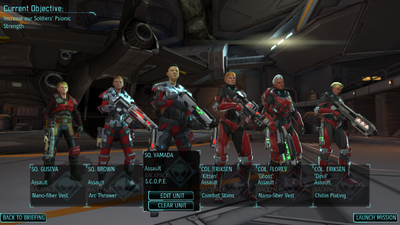 Assaults are the only class that has a choice between primary weapons (Shotgun vs. Assault Rifle). Because of this and the broad applicability of their individual skills, they don't necessarily have clear cut build paths. Shotguns offer damage values identical to Sniper Rifles -- albeit with slightly lower chance for critical hits - and with the right abilities can enhance this to make the Assault one of the most damaging units in the game. Assault rifles trade damage for the safety of distance (and typically better cover, as a result), and defensive skills can further improve the soldier's ability to protect himself and his squad. All Assaults, however, provide the toughness and mobility to form a backbone for your squad, and bringing two (or even more) will become typical as you expand your squad size.

Weapons: Upgrading your weapons is a fairly significant concern for Assaults, as a base Assault Rifle won't reliably kill even Sectoids or Thin Men. Luckily, riflemen get some freebies from capturing enemies. No such luck for shotgunners, who unfortunately are also 1 step further down the tech tree. If Light Plasma Rifles are the most advanced assault rifles you have, give them to Assaults (rather than Supports) in order to offset some of the penalty from Rapid Fire. Shotgunners will also appreciate a decent pistol if you have any to spare, though this is typically a lower priority than giving one to your Sniper.

Armor: Assaults will be a major part of your front line regardless of their weapon and should get first choice of the most advanced armor you have. Ghost Armor is typically your best bet late game, as the defense bonus will generally serve you better than the few extra hitpoints of Titan Armor (though on Council Missions, which are almost exclusively Thin Men, you may want to stick with giving them Titan Armor). Shotgunners in particular will love Ghost Armor's movement speed bonus and invisibility as they charge into the fray. The +100% crit chance you get from firing while invisible also has great synergy with Bring 'Em On and Killer Instinct.

Item: Any item is a viable choice on an Assault, excepting the Medikit. Their position at the front line makes them good grenadiers and good secondary users of the Arc Thrower if your Support's hands are full. If you don't need either of those, Nano-Fiber Vests or Chitin Plating provide a an extra layer of survivability for shotgunners. Later on they can be upgraded to Combat Stims to provide massive stat boosts and damage reduction for breaching. Riflemen with Rapid Fire will appreciate a S.C.O.P.E., especially with its foundry upgrade. Keep an eye on your unit's Will and use Mind Shields if necessary.

Brain Neural Dampening is probably a wiser course than Feedback since Assaults are usually in the midst of your squad and you don't want your Shotgunner getting MC'd then flattening your Medic who just got finished healing him/her. This is a fairly high priority.

Eye Hyper Reactive Pupils will help Shotgunners out when they can't get up close (fire and miss, sure, then get a +10 Aim bonus your next turn). Riflemen will enjoy the added destruction they can cause with Depth Perception. A decent priority, but not insane.

Skin Since Assaults are usually in and amongst the Squad, Bioelectric Skin isn't as useful or necessary. Mimetic Skin will help Riflemen if they're able to sit still. Shotgunners usually move around, or are in inopportune positions for it to be of any use. Since your early Shotgunners may often be the first target for Seekers, they would benefit from Bioelectric, since the strangle attack can easily overcome the meager HP bonus of starting armor, and keep them in the Infirmary for the Rapid Healing you can't buy yet. Riflemen have more priority here than Shotgunners.

Another way to consider your thinking on how to build your Assault soldiers is "Medium Range vs Close-Range". Depending on how you want them to fight, this means choosing either the shotgun weapons for point-blank combat, or giving them rifles to keep your distance from enemy guns. Either way, your Ability choices should match the combat style.

Assault troopers with rifles will be better served with Ghost Armor, plus Crit-chance boosting abilities, and perhaps a S.C.O.P.E.. As you will be keeping them just out of range, Close Combat and Close & Personal are less useful to them, and Bring 'Em On helps them get those last few points of damage they'll need to consistently kill aliens.

Meanwhile, an Assault with a Shotgun-type weapon won't benefit as much from defense (aim is calculated with additive/subtractive values: +20 defense on a 130 point shot (ie: 130%-20%=110%) is still a guaranteed shot), and should be equipped to inevitably soak up damage with Archangel or Titan Armor & Chitin Plating (a grand total Armor HP bonus of 18 for a Major or Colonel: two of these on the front lines, under cover, and you may never have to worry about any soldiers needing time in the Med Bay). As more aliens will move in range, Close Combat Specialist will activate often, and with an Alloy Canon, any alien that tries to run through a door guarded by an Assault Trooper will almost always die. And while Rapid Fire loses a few points on aim, a shotgun-wielding Assault soldier won't even see that point loss on the aim percentage, when they've got the barrel right in the alien's throat. Plus if Ghosting, and Rapid Fire counting as one move, and the Alloy Cannon, an Assault is capable of doing a "One" Shot Kill against anything, even a Sectopod, or the Uber Ethereal, even on Impossible.

Lastly, the Second Wave option "Absolutely Critical" will render all the improve Critical Chance abilities redundant for Shotgunners who you play close-quarters tactics with - save for Hardened enemies, which will only have a +10% difference of receiving Critical Hits.

Also: a common squad formation is two Snipers, two Support, and either two Assault or an Assault and a Heavy. Heavies with the HEAT ammo ability are a little better at killing mechanized enemies, and tend to be able to do so at a safe distance, while two Assaults are better for killing things all around, as most players will focus heavies on being anti-Mech warriors.

Psionic Assault troopers will be easy to train, since their being in the front line means there's always an alien in range to Mindfray (additionally, the reduction to Aim and Move that the alien suffers will help keep your Assault trooper out of danger). As one should always be more proactive with Assault troopers, an assault benefits more from being Psi Inspired rather than Inspiring others, saving his move for attack than defense. It's a toss-up between Telekinetic Field and Mind Control: again, defensive TK may be better if someone else does it for him/her, as is MCing, as anyone in range of a close-range focused Assault will probably be in range of the rest of your squad. Perhaps MC is best for a Psi Assault, as while they may miss a turn doing damage, they'll be closer to the rest of the alien squad, and possibly succeed in MCing an alien that will then be flanking the remaining two aliens. The drawback to this is that MCing the rearmost alien carries the risk of activating any other alien squads that were before, just out of range.

Ghost Armor is still probably the armor of choice, especially for Shotgunners. Paired with Bioelectric Skin, this makes them excellent forward scouts, and anti-Seeker units (since they'll then usually be the ones to trigger them-- though be aware: without that skin, if they are the unit the Seeker is attempting to strangle, Close Combat Specialist will not trigger). Medals may be more useful for Riflemen Assaults, but redundant for a Shotgunner. Both benefit from Tactical Rigging: the S.C.O.P.E. can either give another boost to a Shotgunner's already high critical hit potential, or both aim and critical chance boot to the Rifleman.

Or, if you play Assaults as tanks: Titan Armor, Chitin Plating, Nano-Fiber Vest/Respirator Implant, and Extra Conditioning means an Health bonus of 20, and Second Heart & Adaptive Bone Marrow plus Resilience means you can laugh at anything and everything thrown at them. Add Neural Feedback, a Mind Shield instead of that +2 health item, and certain medal choices, and high stats from Not Equal/Hidden Potential, you have a soldier that can go toe-to-toe with Ethereals and not even flinch.

Assaults make for good Covert Operatives: Lightning Reflexes greatly reduces the risk from EXALT overwatches, using Run & Gun to dash to perform an EXALT transmitter hack can help in a pinch, and the altered Close & Personal combined with Rapid Fire (that's 3 shots total) for flanking shots with a Plasma Pistol will almost certainly kill any EXALT agent. With Training Roulette, if they get abilities such as Low Profile (to go with Mimetic Skin), Bullet Swarm (as an alternate to Rapid Fire), Sprinter (with Run & Gun), Gunslinger (+2 to the only weapon they can use? Yes, please!), or Grenadier (as Operatives have no armor, lobbing grenades from out of sight is a safe battle option to keep them out of the Med Bay), they can complete anti-EXALT missions with great ease.